Representatives of regional RAIS from 118 universities came to Moscow to discuss challenges of adaptation, training and studying international students were facing in the Russian Federation. Congress participants put the most critical issues on the agenda of the plenary session brining them to the attention of the Supervisory board of the Association chaired by Rector of Peoples’ Friendship University Vladimir Filippov, diplomats and representatives of Russian state agencies and bodies: Ministry of Education , Ministry of Foreign Affairs , Rossotrudnichestvo , Ministry of internal Affairs and others.

«Russian education is recognized all over the world, and the number of international students at Russian universities has continued to increase. But we cannot let exciting problems put aside or on hold, so we are working together to overcome them ", said president of the Association of International Students of Russia Yao Adu.

Ministry of Education of Russia perused its support to the Congress in the framework of RUDN University student associations development program. Over the last 20 years this Association has helped foreign students to raise and solve students’ problems.  In the past years, much has been done to promote Russian education and to bolster its capacity to be prepared and respond to exciting and new challenges, to allow Russian education traditions to move towards further excellence, and Association has been involved in this every major advancement, with very good results.

Authorities respond to the recommendations of the Association in the guidelines and use the mechanisms that are best suited for problem solving and issue management. Progress has been registered in the regulatory field, however migration and labor legislation issues, as well on –the- job-training and internship remain a big decision to have to be made on.

Doyens of ambassadors of the CIS countries, Africa, Latin America, ambassadors of Egypt and China addressed students during the Congress. Ambassador Extraordinary and Plenipotentiary of the Republic of Benin in the RF, Mr. Anicet Gabriel Kotchofa, who was one of the founding fathers of the Association and chaired it over the last 15 years, expressed his full satisfaction with the Association recent activities and remarkable progress. "We love Russia and we are grateful for a good education and career success. We feel like we can do what we really like,” Mr. Kotchofa said. “However, we know we can go any further.  Russia has more than 200,000 foreign students studying at its universities now - about the same as Brazil, China, and South Africa, which until recently were closed to the academic exchanges. In the US, for example, there are 1 million international students. Even in Australia 548,000 foreign students are studying now, and education servicers are Australia's second-largest source of income, after Coal exports," Mr. Anicet Gabriel Kotchofa remarked.

The Congress program was full of meetings with the representatives of ministries and embassies . It also provided a unique intercultural opportunity for participants to assist at conferences, discussion clubs and take part in the International Russian as Foreign Language Olympiad., as well as enjoy a cultural program with the festival "Moscow spring" Festival and RUDN University folk festival "Planet South West " to celebrate. 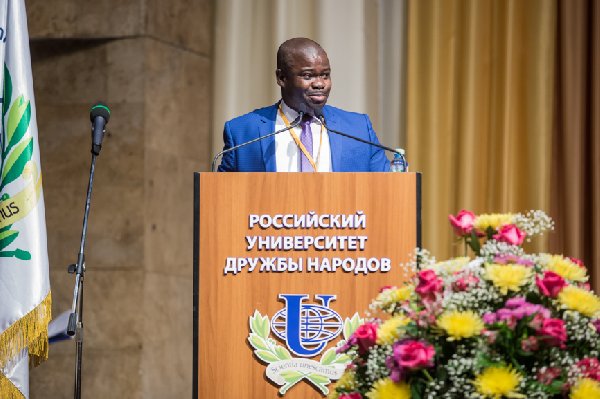