Media
News
About RUDN
RUDN University’s new successes in the field of modern languages, law, oil and gas business, and computer science ... The university strengthens its position in 11 QS rankings

RUDN University’s new successes in the field of modern languages, law, oil and gas business, and computer science ... The university strengthens its position in 11 QS rankings

About RUDN
The QS ranking agency has presented the QS WUR by Subject 2021 rankings — lists of the best universities in the world in specific subjects. RUDN has shown rapid growth in the areas of “Modern Languages”, “Linguistics”, “Mathematics”, “Economics and Econometrics” and “Chemistry”, and for the first time entered the list of the best in the world in the subjects “Oil and Gas Business”, “Law”, " Business and Management “, and “Computer Science”.

First time in the ranking

Last year, RUDN University was in 5 subject and 2 branch rankings. We have improved our positions in all areas and achieved recognition in 4 more subjects. “I would like to thank the entire RUDN University staff for their success in the QS subject rankings. Last year, RUDN University was presented in five subject rankings — ‘Modern Languages’, ‘Linguistics’, ‘Economics and Econometrics’ ‘Mathematics’ and ‘Chemistry’. In all these rankings, we have moved forward, and also achieved recognition in four new subject areas — ‘Oil and Gas Business’, ‘Law’, ‘Business and Management’, and ‘Computer Science’. RUDN University showed the best result in the subject ranking ‘Modern Languages’ — for the first time we entered the top 100. I would also like to thank our chemists who provided the basic scientometric indicators for becoming one of the best universities in the oil and gas business. I am also very pleased that the university immediately got into the top 200 of the ranking in Law,” said Oleg Yastrebov, Rector of RUDN University.

The best result of RUDN University is in Modern Languages. RUDN University is in the top 100 of the world. In particular, this happened due to the fact that the number of votes of academic experts doubled over the year. Linguists from the Peoples’ Friendship University of Russia were voted for from European countries, India and China. RUDN University received the votes of employers from Germany and South Korea for the first time. Advances in science are also noticeable — for example, our specialized journals have become better indexed in international databases. The Russian Journal of Linguistics has already moved up to the second quartile of the Scopus database. Another RUDN journal, Rusistika (Russian Studies), has been included in the Scopus list. RUDN University linguists have relied on interdisciplinarity — they conducted research at the intersection of linguistics, pedagogy, social psychology, migration and urban studies. There are also flagship projects for the study of languages ​​in a minority situation, including migrants situations.

RUDN University entered the subject ranking for the first time in the Oil and Gas Business. The best results are in science. For 5 years, the number of scientific articles on this topic has grown by 1.5 times, and in the vast majority, this is research done by chemists. RUDN has a strong scientific school of heterocyclic reactions, which have found application, in particular, in the reactions of refining petroleum products. This is an example of the contribution of fundamental science to industrial development.

RUDN University entered the top 200 in Law. According to the ranking in the field of “Law”, RUDN University is strong in terms of academic reputation and reputation among employers. The Russian school of law began to be recognized in the world. Academic experts from Great Britain, France, and Colombia began to vote for RUDN University lawyers. For the first time, we received the votes of employers from Austria, Switzerland and South Korea. The qualitative scientometric indicators have also improved — the citation of articles of RUDN University on legal topics has increased 26 times in just one year. This is due to the selection of interdisciplinary, applied topics with international potential — for example, space law, regulation of environmental issues, protection of human rights, and legal support of the digital economy.

For the first time RUDN University entered the subject ranking in computer science. Here the competition is especially tough — 1,500 universities from all over the world are evaluated, and only 650 are included. On this topic, mathematicians of the RUDN University have published almost 600 scientific articles in recent years. Employers began to vote for RUDN University almost 3 times more. For the first time, we received votes from Germany, Israel, Italy, the Netherlands, Switzerland and South Korea. The flagship scientific direction of RUDN University in this area is modeling of 5G wireless networks. RUDN University researchers have created mathematical models that accurately describe the random behavior of mobile users / objects and allow taking into account hundreds of system parameters. This is especially true for cities where there are several devices with Internet access per one square meter.

In the subject ranking in Mathematics, RUDN University has shown growth in all indicators. We entered the Mathematics ranking for the first time last year and were among the top 400. This year our place is almost two times higher. 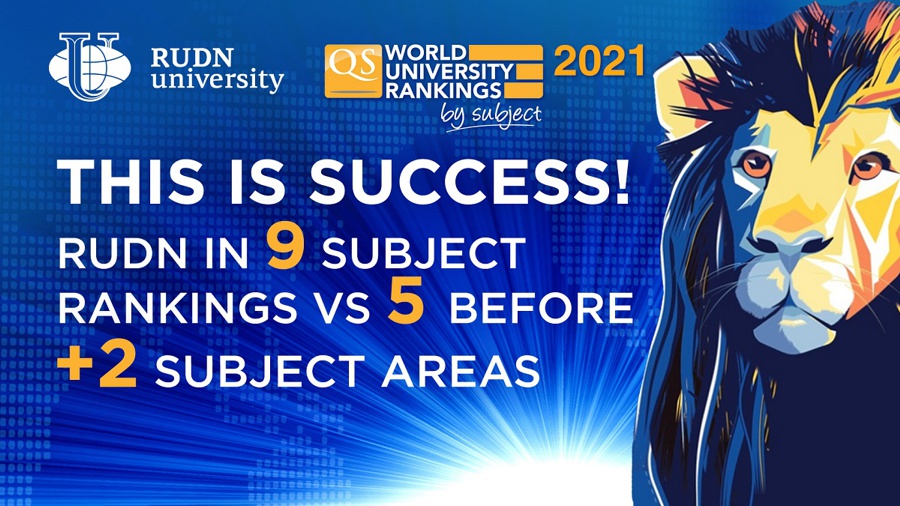 Previous news
Highest recognition of scientific merits to the university: congratulations to the winners of RUDN University prize in the field of science and innovation
Next news
“Let the festive atmosphere, filled with the warmth and freshness of the first flowers, surround you every day, let spring bring happy encounters, events and let your wishes come true,” — Oleg Yastrebov, Rector of RUDN University
News
All news
About RUDN
RUDN University and QS World Merit sign a memorandum of cooperation