Three third-year students of the Faculty of Philology of RUDN University - Daria Eletskaya Maria Averina and Irina Lukyanova, who completed the six-month training at Soka University in the framework of student mobility, were invited to the meeting, where they received diplomas from Yoshihisa Baba for presentations on education system in Russia and RUDN University, academic success and active participation in Soka University social life. This is a good example of successful implementation of academic exchange programs. It is planned to develop not only this area, but also scientific cooperation. Vladimir Filippov suggested opening dual diploma program, a joint scientific guidance of dissertation research. This proposal was received positively by the Japanese counterparts.

It is worth noting that the Universities are very similar, despite their geographical distance from each other. It is obvious from the missions of Universities, the attention to students, the organization of student life and constant attention to the improvement of infrastructure and learning environment. Both universities are actively developing international cooperation. According to Yoshihisa Baba, RUDN University and Soka University are moving in the same direction by relying on common values and similar traditions, taking special care of those students who are friendly and communicative. As noted by rectors, both Universities are trying not only to educate students, but to raise those people who could contribute to the development of their native cities, regions, their countries and the entire world.

Presentation of Diploma and Soka University Superior Honor Medal to Vladimir Filippov by Japanese counterparts brought solemnity to the friendly atmosphere. These awards are presented to eminent persons whose achievements were found the most exceptional in the fields of education, culture and science.

Despite the seriousness and solemnity of the meeting, there were also jokes that shows the special trust-based and friendly character of relations between RUDN University and Soka University. For instance, when Yoshihisa Baba answered the question of what would he take with him, going to Russia for six months in the first place, he laughed and said, "Hot-water bottles!". President of Soka University will take the most valuable souvenir from Russia - knowledge. He said that he wants to study Russian culture more deeply, communicating with Russian people, and visit lots of concerts, especially ballet, because it is very difficult to get there in Japan.

For six months Japan has been home for our students, who already miss deliberate pace of life, temples and ability to contemplate. RUDN University will soon open its doors to students from the County of the Rising Sun. 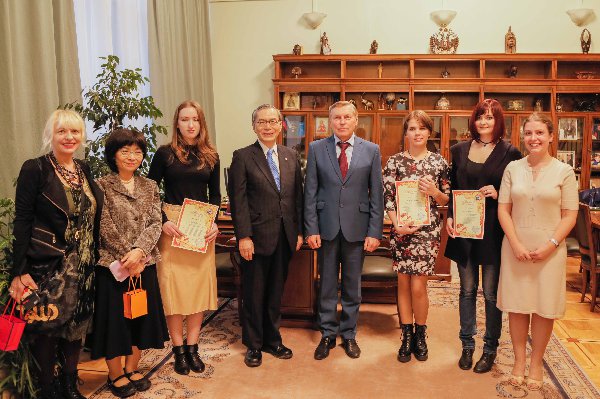