They trust us: RUDN University will train specialists for 160 countries

International cooperation
More than 70 representatives of the embassies of foreign countries in Russia, representatives of the Federation Council, and the Ministry of Science and Higher Education of the Russian Federation took part in the round table "The contribution of RUDN University to training national personnel for foreign countries." The event was held on February 5, in an online format and was timed to celebrate the 61st anniversary of RUDN University.

“A good tradition has formed to celebrate the birthday of RUDN University with successes and achievements that contribute to fruitful progressive development of its scientific and educational potential. First of all, I am honored to report to our distinguished guests that the university withstood the severe trials due to the coronavirus pandemic and did not allow a decrease in the quality and pace of the provision of educational services to foreign students, " said Oleg Yastrebov, Rector of RUDN University.

In 2020, RUDN University managed not only to retain, but also to increase the rate of admission of foreign citizens, 160 states sending their applicants to study at RUDN University.

“This happened due to the fact that Liberia, Malawi, Norway, Trinidad and Tobago and Eswatini (Swaziland) appreciated the global popularity of RUDN and decided to send their fellow citizens to study at our university,” noted Oleg Yastrebov.

Konstantin Kosachev, Chairman of the Federation Council Committee on International Affairs, noted that education and training of highly qualified personnel for the whole world today are of paramount importance and are reaching a qualitatively new level. Russia is actively participating in the competition for talented foreign applicants. The multidimensional strategy for attracting foreign students includes a wide range of measures: from simplifying the visa regime to rebranding the country's universities.

“RUDN University, teaching foreigners for over 61 years, has managed to define its identity as a research and global university. High-quality specialists of RUDN University are in great demand on the international labor market, as well as widely recognized by the academic community. Constant communication and joint team work with students and alumni from other countries allowed RUDN University to become a unique center for uniting the knowledge of people of different cultures ”, said Konstantin Kosachev.

Pyotr Kucherenko, Deputy Minister of Science and Higher Education of the Russian Federation, noted that RUDN is not just a leading university in Russia, but also a place of power. The spirit of RUDN University remains unchanged, which is felt in the variety of languages, clothing styles and even in the ethnic diversity of national cuisines.

“Over the past years, the university has trained more than 200 thousand specialists for more than 170 countries, which contributes to strengthening and development of the regions of Asia, Africa, the Middle East, Europe, Latin America and the CIS countries. Many outstanding alumni have become heads of ministries, governments and states. Serious success of the university in the field of education allowed it to take one of the leading places not only in the Russian Federation, but also in the entire post-Soviet space ”,  said Pyotr Kucherenko.

In 2020, about 4,000 foreign students were admitted to RUDN University. And over 5 years, 22,000 talented applicants from 170 countries have become RUDN University students.

The leading countries in the number of foreign students admitted to RUDN University in 2020, are Afghanistan, Iraq, China, Kazakhstan, Latin America, Syria, Turkmenistan and Uzbekistan.

The most popular fields for the admission campaign in 2020, are traditionally Medicine, International Relations, Economics, Linguistics, Management, Dentistry and Jurisprudence.

In 2020, on the basis of foreign universities, successfully continued their activities 11 joint Centers for the Russian language and pre-university training, 35 specialized classes for in-depth training in mathematics, physics, chemistry, biology, and Russian for talented graduates who wish get higher education at the Peoples' Friendship University of Russia. All of these units are created by RUDN in cooperation with foreign partners

Larisa Efremova paid special attention to the project "Open Olympiads of RUDN University for Foreign Citizens", which is being implemented in 4 languages in 80 countries of the world. For 4 years of the project's existence, more than 10,000 applicants took part in it, 286 becoming winners.

RUDN University has been implementing the federal project "Export of Education" since 2019. Within the framework of the project, a Consortium of 10 leading Russian universities was created, the main task of which is to contribute to the preparation for admission and study at Russian universities of talented foreign applicants through in-depth study of general education subjects (mathematics, biology, chemistry, physics, astronomy, and others) in Russian. To date, on the basis of foreign schools, 7 resource centers have already been created in partner countries: Bulgaria, Kyrgyzstan, Mongolia, Moldova, Syria, Tajikistan and Turkey.

Larisa Efremova told the roundtable participants about the plans of RUDN University to participate in the new all-Russian "Program of Strategic Academic Leadership". Participation in the program will allow obtaining the status of a global research university by 2030, subject to RUDN University's contribution to serious fundamental research and the creation of breakthrough technologies in education.

Sergey Bazavluk, Vice-Rector for work with students of RUDN University, presented the results of the university's extracurricular activities in 2020, to the participants of the round table. He dwelled on the activities of the national communities of RUDN University. Today, there are 120 compatriot organizations, whose main task in 2020 was to help foreign students adapt to the new conditions of the coronavirus pandemic. He noted that systemic informational support and prompt response to students' problems were carried out through the community, including presidents of the communities, round-the-clock interaction with students was established to clarify the situation, which made it possible to avoid panic among foreign children.

Special attention was paid to the activities of RUDN University volunteer movement. From the first days of the epidemic, RUDN University volunteers have joined the all-Russian campaign #MyVmeste (We are together). More than 500 medical students worked in hospitals in Moscow. In total, more than 1,000 students worked with coronavirus patients. 40% of the volunteers are from Africa, 30% from the CIS, 20% from Latin America, the rest are students from Europe. 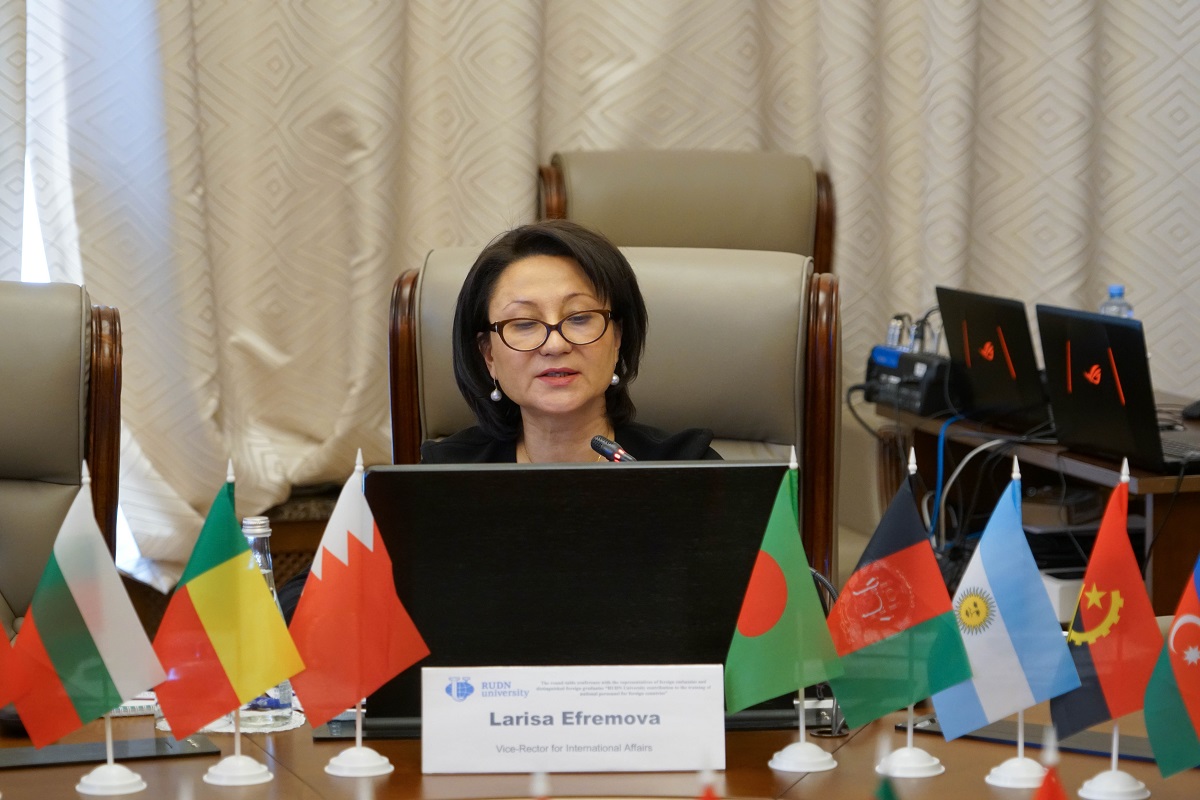 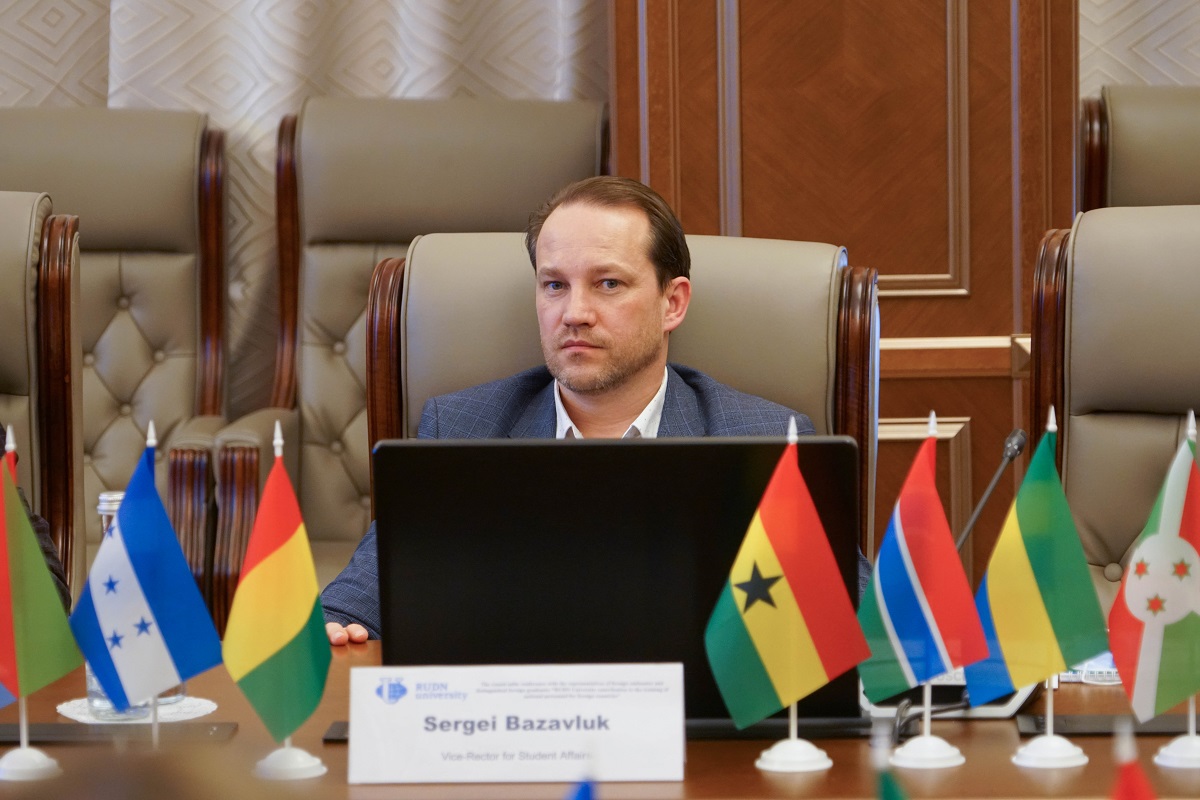 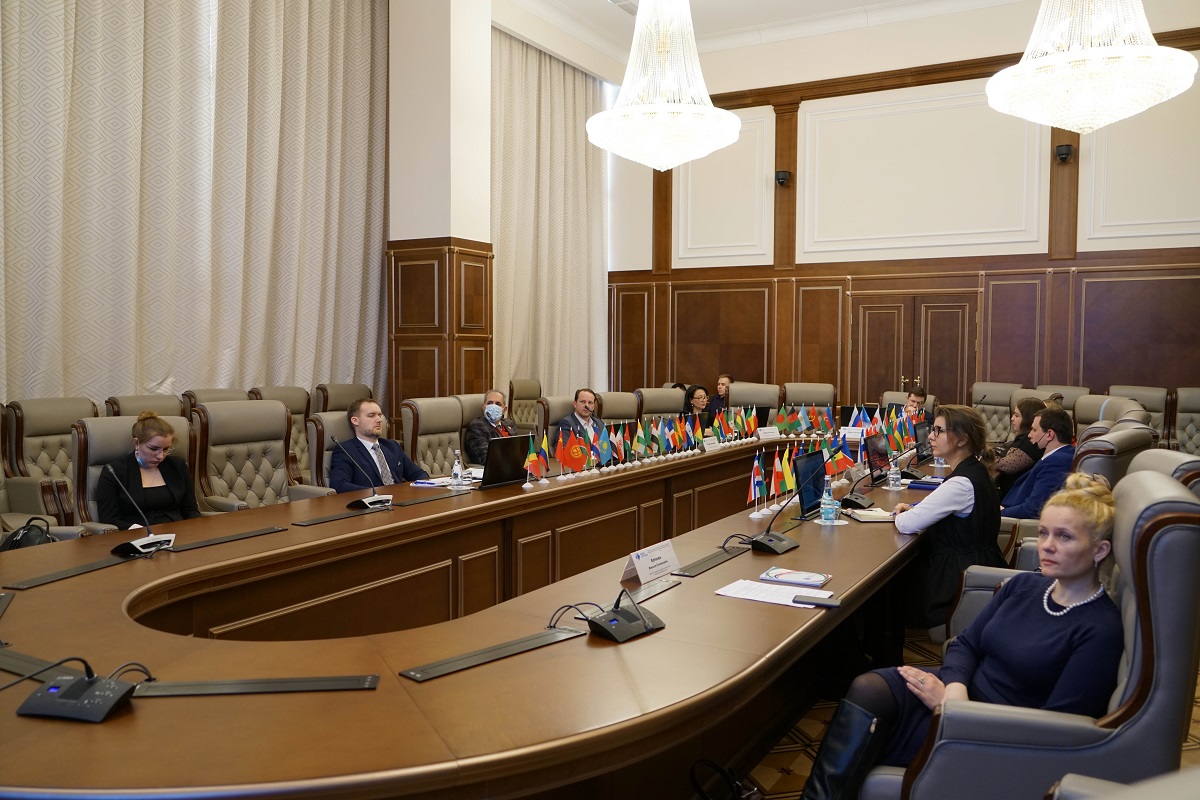 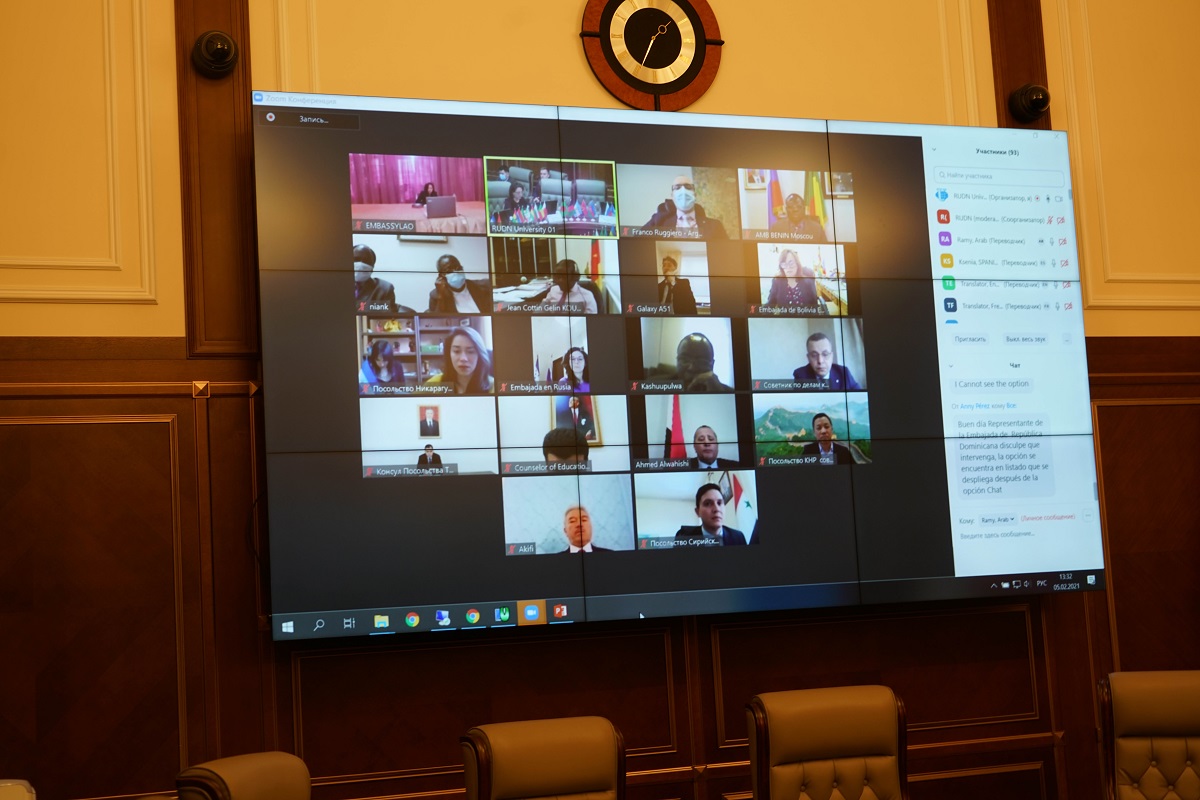 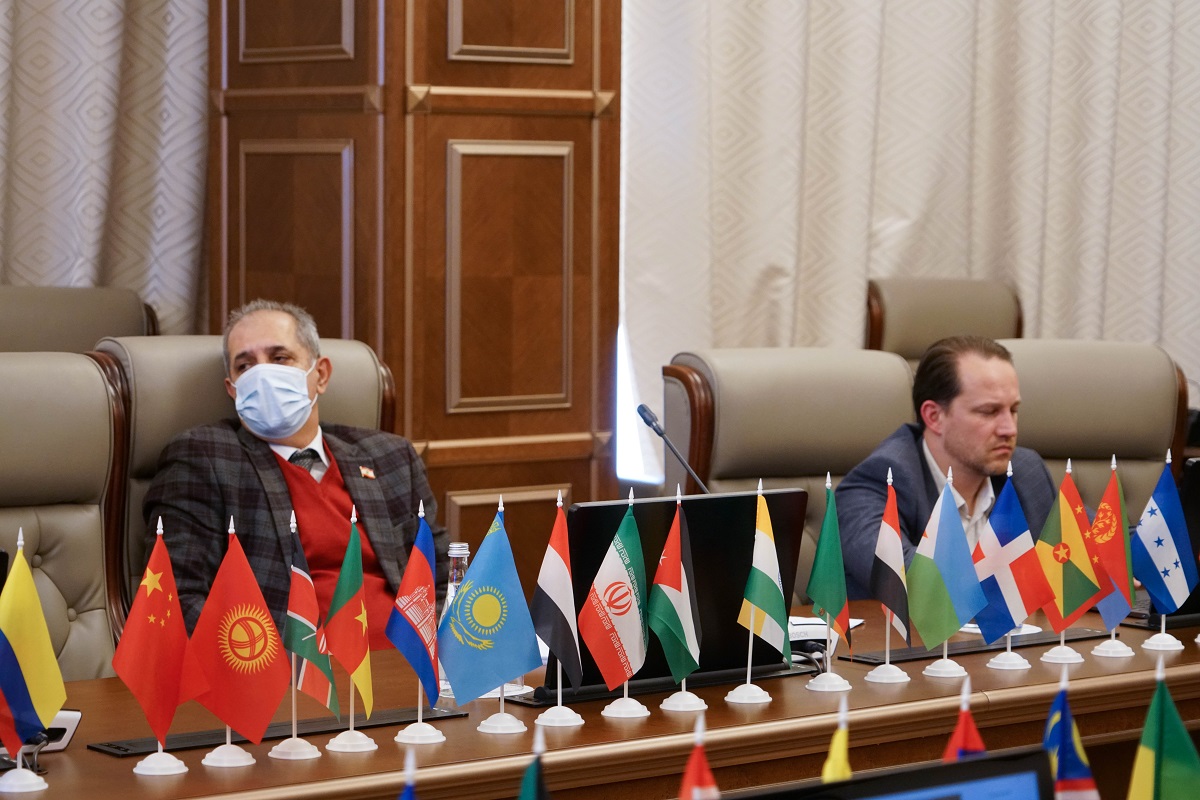