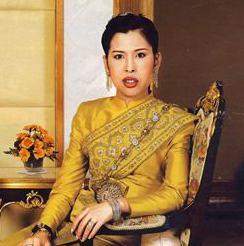 Her Royal Highness, Professor, Doctor of Chemistry, Princess of the Kingdom of Thailand

Thailand
The title 'Honorary Doctor' was received in 2012
Biography

On September 18, 2012 Her Royal Highness Princess of the Kingdom of Thailand Chulapon Mahidol was awarded

the Diploma of the RUDN University Honorary Doctorate Degree.

Princess Chulapon Mahidol is the youngest daughter of the current King of Thailand, Bhumibol Adulyadej.

Her scientific and practical interests are extensive and lie in such areas as genetic engineering, immunology and immune medicine, rational use of natural plant and biological resources.

She has extensive international connections. She is a special advisor to the United Nations Environment Program (UNEP, 1992); Goodwill Ambassador of the World Health Organization (1990); member of the Executive Committee of the International Organization for the Development of Chemical Sciences; honorary member of the Australian Royal Society of Physicians. Chulapon Mahidol headed the delegations of Thailand and was a personal representative of the King at many international conferences and forums.

She has many national and international academic honorable distinctions and awards (about 50 ones), including the UNESCO Albert Einstein Gold Medal, the award of the International Association of University Presidents, the Albert Hoffmann Gold Medal (University of Zurich), etc.

Chulapon Mahidol is a member of the chemical societies of the world's major powers (American, British, Germanic ones), including the Russian Chemical Society.

She founded the Princess Chulapon Research Institute, which became the leading research institute of the country with a wide international network of cooperation, the sphere of which includes fundamental and applied sciences, medicine and healthcare.

Princess Chulapon has 15 titles of Honorary Doctor of the largest universities of different countries of the world, including Diplomas of Honorary Doctor of D. Mendeleev University of Chemical Technology of Russia and St. Petersburg State University; about two dozen national and foreign orders; about 60 publications in national and international scientific and specialized journals.