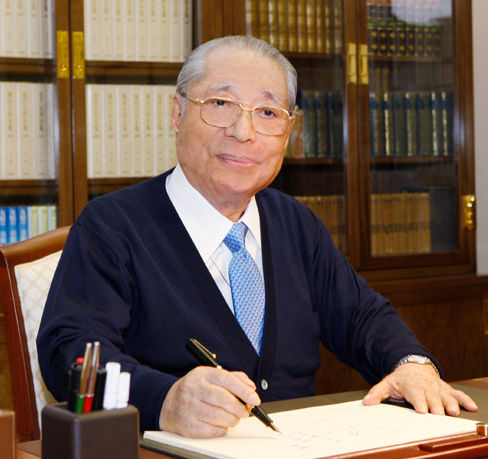 Japan
The title 'Honorary Doctor' was received in 2014
Biography

Daisaku Ikeda was born in Tokyo. From adolescence he passionately enjoyed reading, began to compose poetry and develop his interest in art, music, philosophy and photography.

After the Second World War D. Ikeda graduated from the Fuji Institute in Tokyo. In 1947 at the age of 19 he accepted Buddhist faith and joined the society of Soka Gakkai soon after meeting with the famous teacher Josei Toda (the second president of Soka Gakkai), who became his personal teacher and a teacher for his all life. Good mentoring by J. Toda helps D. Ikeda to master more deeply the world philosophy, politics, literature, art, economics, jurisprudence, chemistry and other disciplines.

In May 1960 D. Ikeda became the third president of Soka Gakkai. Since 1979 he became the honorary president of this society. During the 19 years of his management of the Soka Gakkai Society the Buddhist movement has received intensive development throughout the world.

In 1975 Daisaku Ikeda founded the international Buddhist association Soka Gakkai International (SGI) and became the president of this secular peacemaking society, the association that soon united more than 12 million people in 192 countries and regions of the world.

D. Ikeda visited more than 50 countries, where he met with figures of science, culture and politics. He is convinced that overcoming confrontation between nations and creating a humane society are possible only by non-violent means – through dialogue. According to D. Ikeda, the world movement SGI is aimed at promoting peace and prosperity of mankind through the support of the educational and cultural sphere.

D. Ikeda is a founder of a number of institutions designed to implement the ideas of humanism and mercy. For example, in the educational system – kindergartens (in Japan and five other countries), primary, secondary and high schools, universities (in Japan and the USA), Makiguchi Foundation for Education; in the sphere of culture – Min-On Concert Association, Tokyo Fuji Art Museum; in the sphere of science – Institute of Oriental Philosophy, J. Toda International Institute for Peace, etc.

D. Ikeda is the author of many works that reflect a wide range of his versatile interests and include poetry, scientific works, works on problems of politics and civilization. They are translated into more than 40 foreign languages.

D. Ikeda often delivered lectures to the general public on topical problems of our time. Since 1982 he annually sends his appeals to the UNO with specific "Peace Proposals" on the issues related to the UNO role, nuclear disarmament, environmental protection.

D. Ikeda is a UN Peace Prize Laureate; he was awarded "For Humanity Award" of the UN High Commissioner for Refugees, honorary title "Poet Laureate" of the World Academy of Arts and Culture, the Russian Federation state award "Order of Friendship", etc.