Media
News
Life in RUDN
Throw a dice. RUDN students develop a board game about the university

Throw a dice. RUDN students develop a board game about the university

Life in RUDN
Author’s design, mathematical calculations and probability theory — RUDN University students implemented the idea of creating a board game about the university into a project. Each was responsible for their own block of tasks: Nikolai Klykov calculated moves and points, Anna Zheltikova created cards with real people of the university, Daniil Shishov developed the game design, and Yuri Bereznev perfected the concept.

Read about how the game "Welcome to RUDN" was created.

“I am a fourth-year student of Nanoengineering at the Engineering Academy. I study 3D modeling and dream of creating a commercially successful product at the intersection of textile industry and nanotechnology. We met with the students from the team at the intensive ‘From Idea to Prototype’. Most of us live in the same dorm, so brainstorming sessions could be held at any time without leaving the campus. We realized that we love to play board games and how cool it would be to dedicate this project to RUDN University.

I developed all the text in the game: in the rules, on the box, and on the cards. I tested it, honed the main game mechanics, working out the concepts. I also dealt with economic and legal issues. We thought it would be cool to make cards with real people from the university — rector, president, vice-rectors and deans. We selected funny quotes. We really wanted to show everyone what cool projects can be implemented at the university,” said Yuri Bereznev, fourth-year student of the Engineering Academy.

“I am a future architect. I go in for dancing in RUDN Cheer Hip-Hop team, I like to listen to vinyl records from retro players, I love fashion and design. I got into the team by chance — I heard about the idea of the game and wondered what it was like. I participated in the development of design and illustrations drawing pictures and graphic elements, and preparing layouts for printing.

I’m proud that we have released a board game. Everything is carefully thought out in it — the field, rules, cards, moves and figures. Each part of it is especially dear to me. The main goal of the game is to involve applicants and first-year students in activities introducing them to the university. And it does work, because the game is already used at events in RUDN University and beyond. Our team will not stop there, there will be more cool projects!” said Anna Zheltikova, third-year student of the Engineering Academy.

“I study at the Institute of Ecology at the ‘Ecology and Nature Management’. I am a traveler, I have visited 16 regions of Russia since the beginning of the year. In ‘Involta’ IT company I am developing a mobile application for traveling around Russia.

The team and I went over a lot of product options for development, but settled on a board game about RUDN University. Now many areas are striving for gamification, and we also decided to gamify the immersion of an applicant and student into university life. In the project, I am a designer — I developed the visual style of the entire game. I changed everything several times, and in the final version I chose the corporate style of RUDN University. Not a single university in Russia has its own board game! Let students know that such projects are possible,” said Daniil Shishov, 4th year environmental student.

“I study at the Engineering Academy majoring in Applied Geology. I love math and reading books. I saw a letter in the mail about an interuniversity startup competition — and that’s how I got into the team. It took us a long time to decode what the product would be like, and the choice fell on board games. In the project, I am the chief game designer of the board game — I worked out all the game mechanics, created the general concept and calculated the mathematics of the game. I am proud that we were able to bring our idea to the end. The idea of getting to know the university in a game format became obvious due to the gamification trend.

The most difficult thing in game development is the rules, because they must be encyclopedic and understandable to every person. Behind all the words lies the theory of probability and the foundations of game theory. Correct calculations at the stage of creating a game give players an equal chance of winning. We have several projects that we are developing, you will definitely hear about them,” said Nikolay Klykov, 5th year student of the Engineering Academy.

We are grateful to the “Business Club” RUDN Higher School of Entrepreneurship and Anna Ostrovskaya, Director of the School. The project turned out so cool with the advice and support of Angela Litvina. We are also very grateful to the management of the university for their support in the implementation of “Welcome to RUDN”. 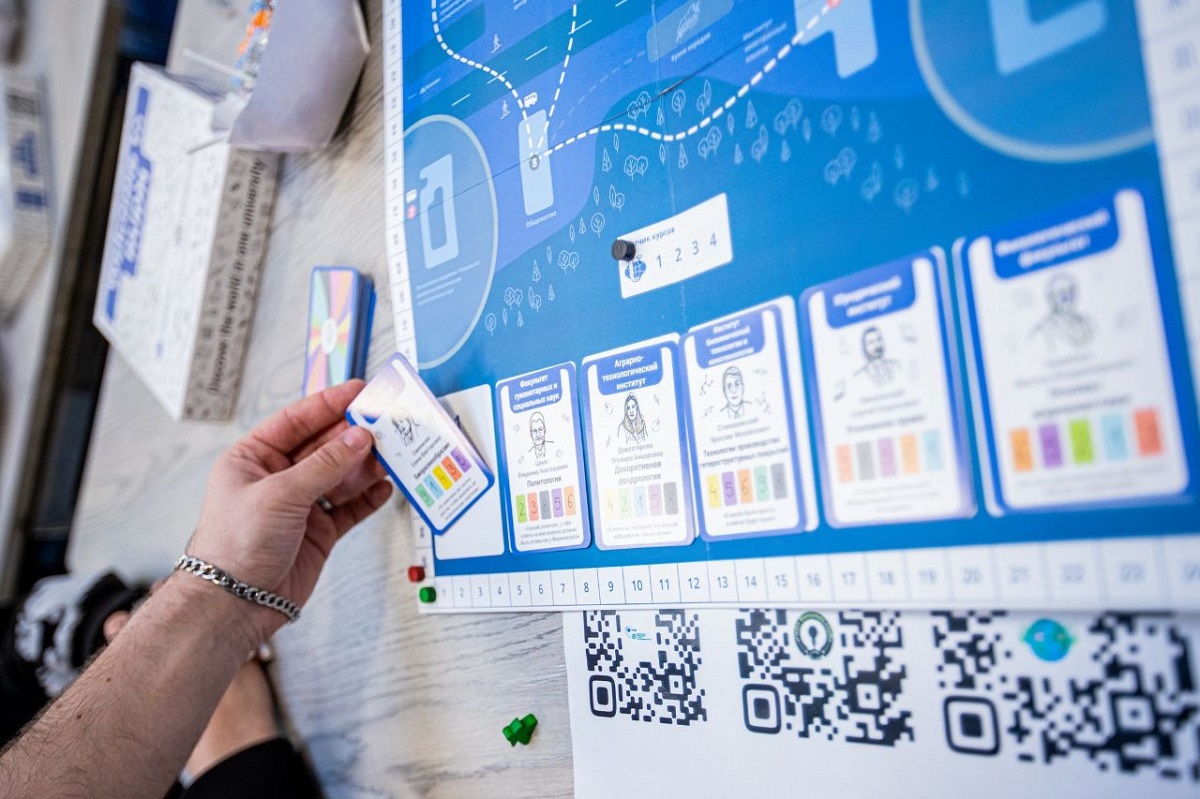 Previous news
“Subscription for the new academic year is activated”: the results of the admission campaign and the emotions of 1st-year students
Next news
15 employees of the Peoples' Friendship University of Russia receive awards from the Russian Ministry of Education and Science, RUDN University and the "Global Universities" Association
News
All news
Life in RUDN
Great love for the profession and alma mater. The story of Victoria Ismagilova, an excellent student of 10 semesters of RUDN Engineering Academy