Science
People who were born prematurely, with a lower body weight and growth delays in the womb, are more likely to suffer from disorders of neuropsychological development. RUDN doctors have proposed and tested a method by which deviations can be detected in the first weeks of life.

Symptoms of such deviations practically do not appear immediately after birth, since the child’s nervous system is just being formed, and doctors do not always have enough tools to recognize the pathology. But in the first years of life, the brain grows rapidly, and its neuroplasticity is high, so early diagnosis could partially correct the disorders. This problem could be solved by a sensitive, fast and not very expensive method of examinations — a three-dimensional ultrasonogram, or ultrasound, with which you can assess the development and volume of various brain structures in newborns. But scientists have only fragmentary data on the use of such a research method on premature infants in the first weeks of life. To fill this gap, neonatologists of the RUDN have studied the effect of early birth and growth delays in the womb on the development of children’s brains.

“Progress in medicine today allows even children born before 32 weeks and with a body weight of less than a kilogram to survive. However, it is not yet possible to reduce the risk of developmental disorders in such newborns. We need signs by which we could accurately predict in the first weeks or even days of life what psychological, behavioral and other deviations will occur in such children later. Then we could immediately start therapy and not miss the moment so that the child does not lag behind in development even more,” Candidate of Medical Sciences Anna Borisova, assistant of the Department of Obstetrics, Gynecology and Reproductive Medicine, RUDN.

Premature birth and intrauterine fetal development delay can have different causes and be accompanied by additional circumstances and complications, therefore, researchers from the RUDN together with colleagues from Russia and Italy compiled a diverse sample of 158 term-born, 113 premature babies, as well as 66 infants with growth retardation from the city of Perugia in Italy. In the first 30-40 days of life, infants were assessed for the total volume of the brain, the volume of the thalamus, which processes information from the sensory organs, the volume of the frontal cortex of the cerebral hemispheres and the cerebellum, which helps coordinate movements.

The development of children was monitored until the second year of life, when their psychomotor development was tested on the Griffiths scale. The results were compared with the data of three-dimensional ultrasonography shortly after birth. Disorders of the nervous system development were found in 20 children with limited intrauterine growth and 13 premature infants. At the same time, 301 babies, among whom were all 158 born on time, did not have any deviations.

“The results of our work show what advantages three-dimensional ultrasonography can have in the diagnosis of disorders at an early age. Assessing the volume of the most important brain structures helps to understand how quickly they develop. At the age of 30-40 days, such an examination has every chance of becoming a useful diagnostic method offering high accuracy and reproducibility. Such an assessment can be carried out easily and quickly, and the cost of one procedure is relatively small, which makes diagnostics affordable,” Candidate of Medical Sciences Anna Borisova, assistant of the Department of Obstetrics, Gynecology and Reproductive Medicine of the RUDN.

The results of the study are published in the journal Ultrasound in Medicine & Biology. 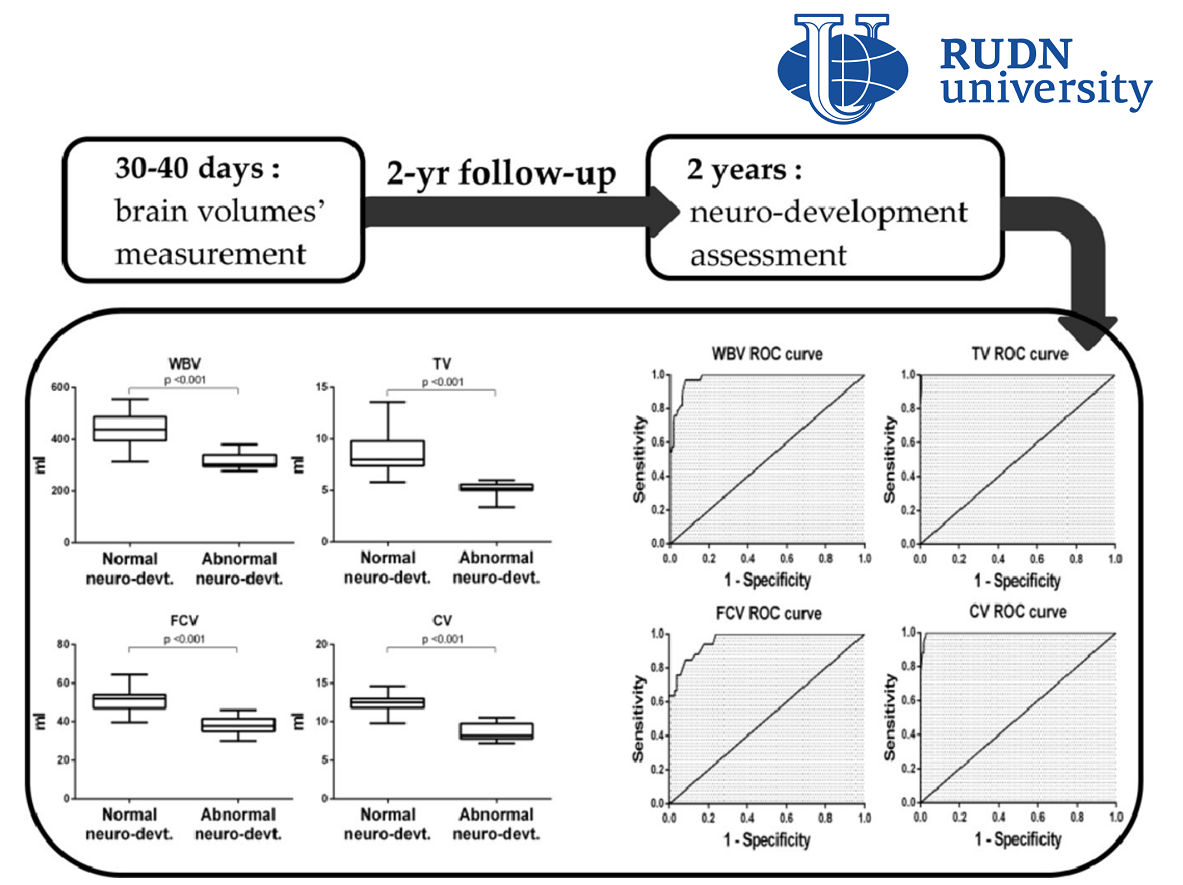