Science
A team of researchers found out that children with autistic spectrum disorder (ASD) have increased levels of the amino acid hydroxyproline. According to the medics, this may be associated with joint hypermobility, a common symptom in ASD patients. This information can help improve anti-ASD therapy.

Amino acids are the building blocks of proteins, and proteins are what our muscles, internal organs, and also enzymes and hormones are made of. They control our daily functioning and secure healthy growth and development of our bodies. Both lack and excess of amino acids can cause health issues. One of the factors that can have a negative impact on the balance of amino acids is autistic spectrum disorder or ASD. It manifests itself in a patient’s early childhood and remains with them for the rest of their life. It is still unknown how exactly ASD affects a patient’s amino acid profile and what effects it has on their body. However, a team of researchers found out that children with ASD have increased levels of the amino acid hydroxyproline. This may be associated with joint hypermobility, a common symptom in ASD patients.

“The available data about the amino acid profile of ASD patients is quite contradictory which may be due to age and gender differences, specifics of clinical treatment, and other parameters. Information about the levels of several amino acids at a given time can help better understand the specifics of metabolism in ASD patients. That is why in our work we focused on studying the levels of amino acids in children’s blood serum,” said Alexey Tinkov, PhD, and a lecturer at the Department of Elementology at RUDN University.

The participants of the study were 97 boys from 3 to 14 years of age, of which 64 were diagnosed with ASD. The levels of amino acids in their blood serum were measured using high-efficiency liquid chromatography with UV detection. This method allowed the researchers to break the samples down to their components and measure their concentrations.

Four amino acids (leucine, serine, tyrosine, and hydroxyproline) turned out to be associated with ASD. Hydroxyproline is a component of collagen, the basis of all connective tissues: tendons, bones, and cartilages. Therefore, the team assumed that increased hydroxyproline levels might be the cause of joint hypermobility. By various estimates, this disorder is found in 15% to 50% of young ASD patients. The level of hydroxyproline in the blood of healthy children amounted to 0.87 mg per liter, while in ASD patients it reached 1.7 mg/l. The team also found out that the levels of arginine, glutamine, histidine, leucine, lysine, phenylalanine, serine, taurine, tryptophan, and threonine in the blood of children with ASD were 15% to 28% lower than in healthy ones. Among other things, these amino acids regulate the growth and reconstruction of body tissues. According to the researchers, their deficiency can negatively affect a child’s psychomotor development.

“We assumed that increased hydroxyproline levels might be associated with joint hypermobility, and the deficiency of other amino acids might affect the neuronal dysfunction. Further studies may identify potential targets for proactive treatment. Theoretically, the normalization of amino acid balance can become an additional tool for ASD therapy,” added Prof. Anatoly Skalny, MD, the head of the Department of Medical Elementology at RUDN University.

The work was published in the Research in Autism Spectrum Disorders journal. 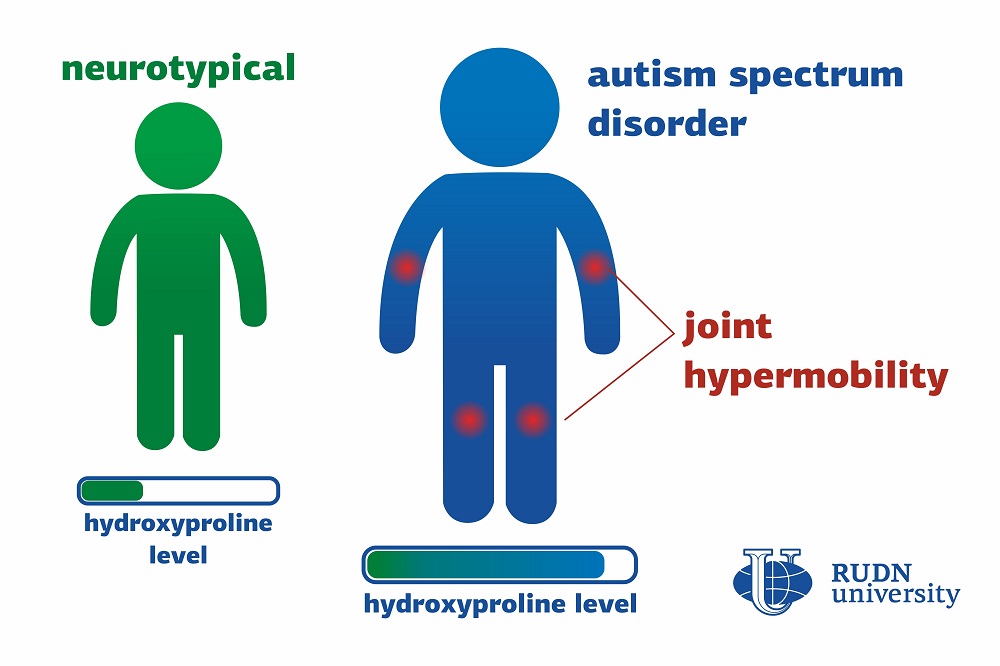