Science
Heavy metals suppress enzyme activity in the soil by 3-3.5 times and have especially prominent effect on the enzymes that support carbon and sulfur circulation. This was discovered by a soil scientist from RUDN together with his colleagues from Chile, Germany, the UK and Venezuela. The data obtained by the team can lead to more efficient use and fertilization of agricultural lands.

Soil enzymes promote chemical reactions in soils, regulate cellular metabolism of soil organisms, participate in the decomposition of organic matter, and in the formation of humus. The quality and fertility of soil depend to a great extent on the activity of soil enzymes. Heavy metals, such as lead, zinc, cadmium, copper, and arsenic reduce the catalytic abilities of enzymes, thus interfering with the circulation of chemical elements.

Yakov Kuzyakov, a soil scientist from RUDN, together with his colleagues from Chile, Germany, UK and Venezuela analyzed 46 studies of the effect of heavy metals on soil enzymes. The authors of the work chose six enzymes and grouped them by the chemical elements they affected. For example, arylsulphatase is an enzyme that promotes reactions between water and sulfur-bearing acids. Therefore, it is associated with the biogeochemical cycle of sulfur. Similarly, other enzymes play their roles in the cycles of carbon, nitrogen, or phosphorus.

The team compared the activity of enzymes in healthy soils and ones contaminated with heavy metals. Intracellular enzymes (i.e. those found in the cells of plant roots and microbes) associated with carbon and sulfur cycles turned out to be the most sensitive to contamination. This might be due to the fact that extracellular enzymes bind with clays and organic matter which makes them more stable.

“Extracellular enzymes are more resistant due to the organo-mineral complex that stabilizes them in the soil environment and that intracellular enzymes lack. Enzymes that participate in nitrogen and phosphorus circulation showed medium to low activity reduction levels because they are predominantly extracellular,” said Yakov Kuzyakov, a PhD in Biology, the Head of the Center for Mathematical Modeling and Design of Sustainable Ecosystems at RUDN.

Arylsulphatase and dehydrogenase, two enzymes in charge of gas exchange, glycolysis, and fermentation, were found the most sensitive. In soils contaminated with heavy metals, their activity reduced by 64% and 72% respectively, i.e. by 3-3.5 times. Some enzymes, such as beta-glucosidase and catalase, demonstrated reduced activity even when the concentration of heavy metals in the soil was very low (up to 200 mg per 1 kg). Unlike them, urease, an enzyme that plays a role in nitrogen circulation, is less sensitive to heavy metal concentration: its activity reduces by 10% at low levels of contamination and by up to 70% when contamination values are extremely high. Notably, the activity of acid phosphatases increases in the presence of small amounts of cadmium and copper in small amounts.

“Our study leads to a better understanding of the processes that cause soil systems to degrade under the influence of heavy metal contamination. The obtained results may help develop new methods of restoring contaminated soils,” added Yakov Kuzyakov.

The results of the study were published in the Science of the Total Environment journal. 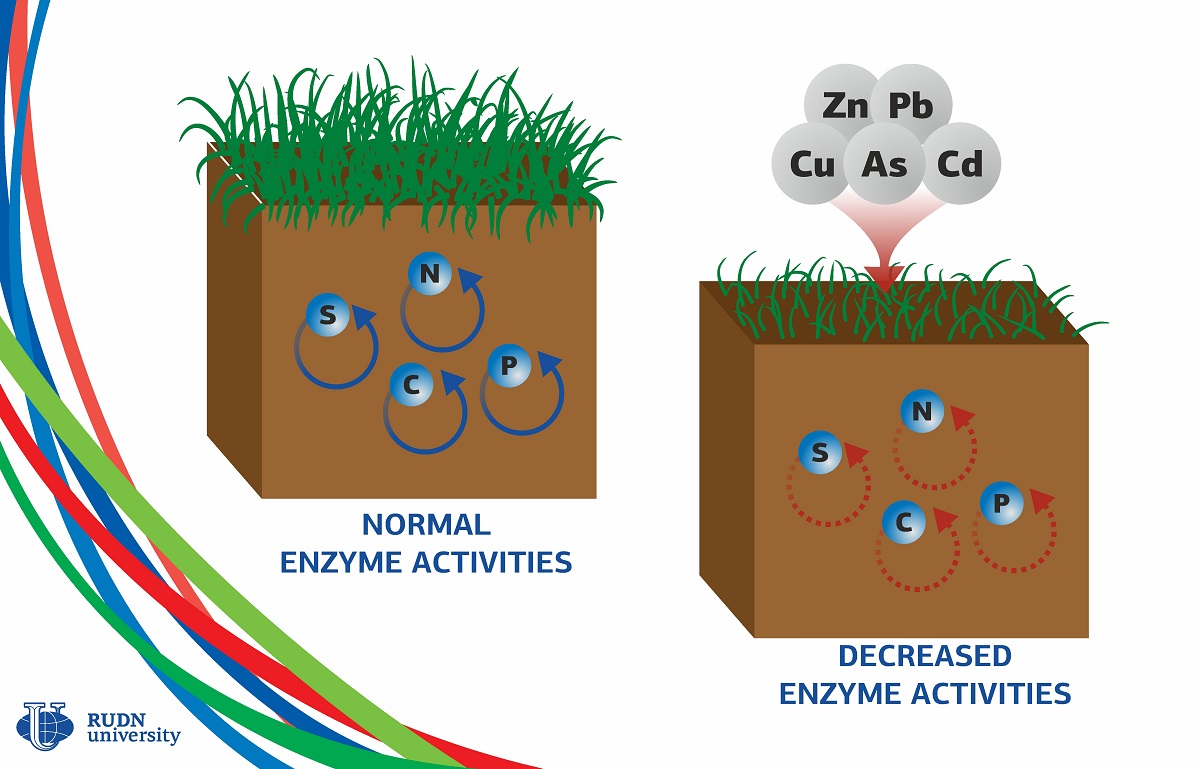