Science
RUDN and Shahid Beheshti University (SBU) chemist proposed an eco-friendly method for the synthesis of pyrrole and pyrazole derivatives with a wide range of applications in medicine: from antidepressants to anticancer. Moreover, the synthesized compounds possess interesting fluorescence features, and the bioactive scaffolds might attract great interest in the fields of clinical diagnostics and biomedical research in the future.

Heterocyclic compounds expose remarkable chemistry with significant applications in medicinal and organic chemistry, industry, and pharmaceutical. These compounds are widely found in many natural products such as vitamins, hormones, antibiotics, alkaloids, herbicides, pigments, and dyes. Besides, a wide variety of heterocyclic rings is originated from the scaffolds of various drugs and bioactive molecules. Among them, pyrrole and pyrazole are heterocycles with a wide biological activity. They are part of drugs for the treatment of cancer, headaches and depression, relieving inflammation and a number of other diseases. Some of them demonstrate fluorescent properties, and therefore they can be used for clinical diagnosis, for example, cancer. However, the synthesis of compounds with these heterocycles remains non eco-friendly and expensive. It needs high temperatures and hazardous compounds. The RUDN and SBU chemist and his colleagues from Tehran-Iran suggested a safer and cheaper way to create pyrrole and pyrazole derivatives.

“Pyrroles and pyrazoles represent one of the most active classes of compounds, possessing a wide range of biological activities. It includes anti-inflammatory, antidepressant, antitubercular activity, they are also active against microbes, fungi and bacteria. That is not the complete list. Still, it is a powerful challenge to design an ideal synthetic protocol for this type of biologically active compound using environmentally friendly and step-economic methods and less hazardous reagents under mild reaction conditions”, Dr. Ahmad Shaabani from RUDN and SBU.

The chemists have obtained compounds of pyrazole and pyrrole derivatives by the “one-pot” method, when all the stages of synthesis take place in a single reactor. Thus, scientists do not need to waste time and reagents on the isolation and purification of intermediate compounds. In total, four types of substances participate in the reaction: aminopyrazole, aldehyde, dimethyl acetylenedicarboxylate, isocyanide. They convert in a domino reaction, when all the steps occur one after the other without additional compounds. The reaction occurs at a low temperature — 45℃ — under ultrasound irradiation in the presence of p-toluenesulfonic acid as a catalyst.

By changing the combinations of the four reactants, the chemists obtained 22 compounds. It turned out that most of them have fluorescent features — they glow blue under the ultraviolet light. The most intense fluorescence was associated with the presence of bromine derivatives in the cyclic fragments of the obtained substances.

“This eco-friendly, mild condition and atom-economical process generated two C—N and two C–C bonds and formed two five-membered heterocycles connected to each other. We believe that these new classes of fluorescent compounds may be of excellent interest in biomedical applications and clinical diagnostics in the future”.

The results are published in the Organic & Biomolecular Chemistry. 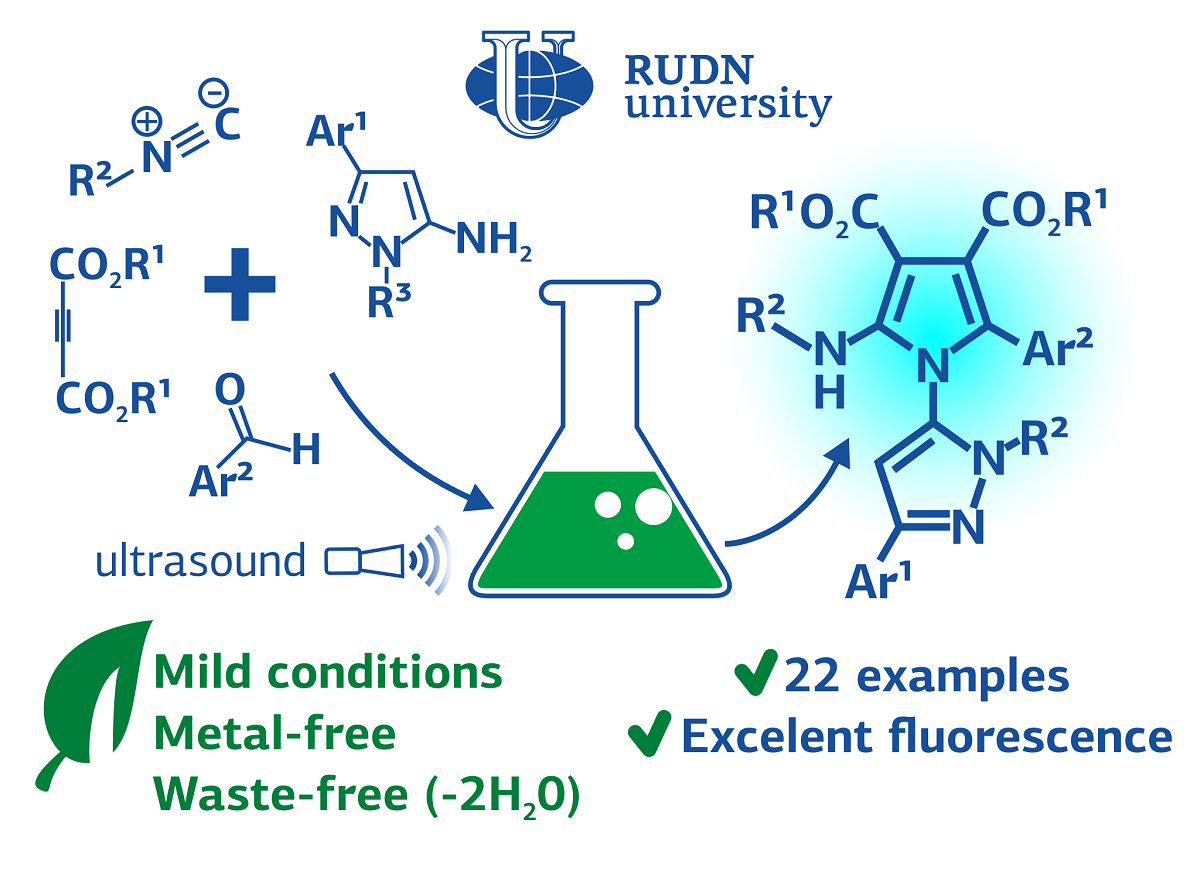 Previous news
RUDN University Mathematician Suggests the Way to Make Group Decisions With “Conflict behaviour” of Participants
Next news
Fast and convenient: the Multipurpose Center of RUDN University rendered more than 132,000 services in a year
News
All news
Science
RUDN chemists have created a biodegradable polymer for disposable medical products