Science
A team of chemists from RUDN University and Nesmeyanov Institute of Organoelement Compounds (INEOS) synthesized two heterometallic clusters with almost 100% efficiency. These compounds can be used as catalysts in pharma, production of polymers, and other branches of the chemical industry.

A metal cluster is a group of several metal atoms with significant interaction between them. Clusters that contain atoms of different metals are called heterometallic. They are used as catalysts in organic reactions, for example, in the pharmaceutical industry or the production of polymers. However, the development of such clusters is not an easy task. A team of chemists from RUDN University and INEOS suggested an effective way to obtain heterometallic clusters from a regular metal cluster that consists of three atoms of rhodium.

“Rhodium is known to be a catalytic metal, and many organic processes are catalyzed by rhodium-based metal clusters. However, the majority of approaches to the synthesis of heterometallic clusters are inconsistent and led to the product with the little yield. We managed to develop highly efficient rhodium-based heterometallic clusters,” said Olga Chusova, Ph.D., a researcher at the Scientific Center “Chrystal Chemistry and Structural Analysis”, RUDN University.

The team used a cluster of three rhodium atoms connected in the shape of a triangle with ligands (molecules that determine the behavior of the atoms) attached to its verstices and sides. Some ligands are more advantageous for the compounds than the other. Having carefully chosen ligands both in the initial cluster and the reagents, the chemists managed to obtain new heterometallic clusters. Namely, they used a metalloelectrophile (a substance that contains a metal atom lacking electrons) as a reagent. Thanks to this, a new complex of different metal atoms was formed. Instead of a triangle, the heterometallic cluster is shaped like a tetrahedron with three rhodium atoms and one gold or cobalt atom in its vertices.

This mechanism made the reaction almost 100% efficient, i.e. the actual amount of the obtained heterometallic cluster almost exactly matched the team’s predictions (by 81% in the case of cobalt and by 93% for gold). Notably, the reaction went well in both cases, although gold- and cobalt-containing metalloelectrophiles have different structures.

“Despite the differences in their electronic structure, both metalloelectrophiles reacted with the triangular rhodium cluster and formed stable tetrahedral clusters. This is due to the unique structure of the initial cluster: it can provide a different number of electrons depending on the metalloelectrophile. In this case, the gold-based one required only two electrons, and the cobalt-based one needed six,” added Olga Chusova from RUDN University.

The discovery can potentially improve the synthesis of heterometallic cluster-based catalysts for the chemical industry.

The results of the study were published in the Journal of Organometallic Chemistry. 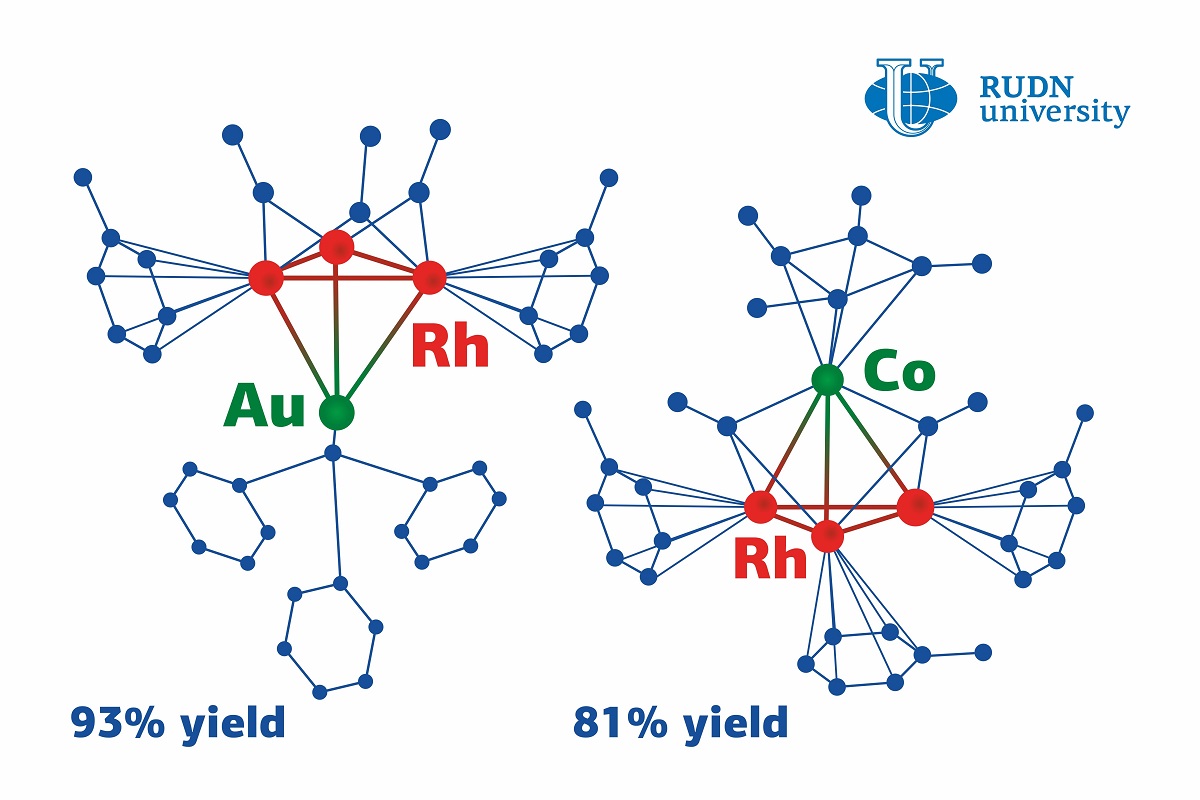