About RUDN
QS Ranking Agency introduced QS WUR by Subject 2020 rankings - lists of the best universities in the world in selected subjects. RUDN University has shown rapid rise in the areas of “Linguistics” and “Modern Languages”, and also for the first time became one of the best in the world in subjects “Mathematics”, “Economics and Econometrics” and “Chemistry”.

In 2020, RUDN University was included in 5 subject and 2 facult areas rankings of the global QS ranking. In the areas of "Modern Languages" and "Linguistics", the university rose over the year by 50 and 100 positions, respectively; The University first entered three QS subject rankings - in Mathematics, Chemistry, Economics and Econometrics. In faculty area rankings, RUDN University went up in “Arts and Humanities” and entered the Top-500 list of “Social Sciences and Management”.

Entered for the first time

On modern languages ​​and linguistics

“In the ranking of modern languages ​​and linguistics, indicators of academic reputation are of great importance,” said RUDN Rector Vladimir Filippov, “RUDN Linguistic Journal” immediately entered 2 international databases - Web of Science and Scopus. The agreement with the French Academy of Sciences made it possible to open a joint laboratory for studying the dynamics of languages ​​in a minority situation. The expert experience of our linguists was presented at the Council of Europe, at the Rectors Forum in Seoul, at the QS World Wide Forum.”

If we talk about the recognition of employers, RUDN University provided translation and interpreting assistance at the World Cup, in the WorldSkills finals in Kazan and at 200 other major events.

Among current topics: linguistic problems of migration processes, problems of languages ​​in the regions, and cognitive processes of teaching bilingual children.

RUDN University was first included in the subject ranking in chemistry, in which scientometric indicators are important. Points for citation and the H-index almost doubled during one year.

The academic reputation of chemistry at RUDN University is evidenced by the fact that world-class scientists from France, Spain, Iran, China, the USA, Japan, as well as Nobel laureates, including Professor Jean-Pierre Savage, participate in our conferences.

192 articles have been published in collaboration with leading foreign chemists. 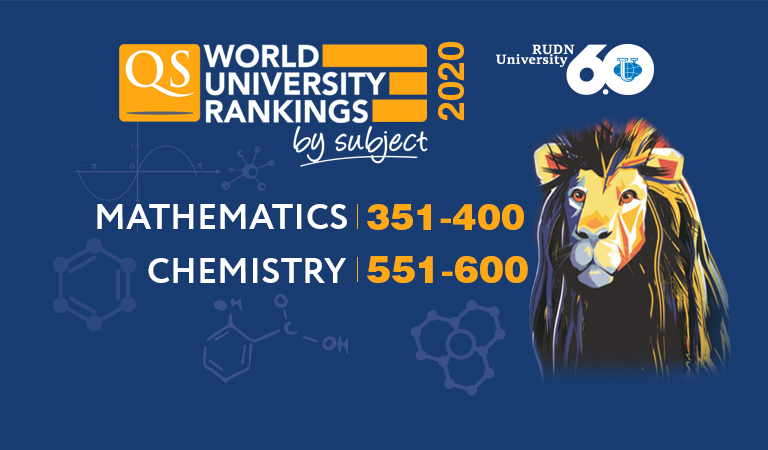 Previous news
Drastic rise of RUDN University in QS subject rankings in Linguistics and Modern languages. For the first time RUDN is on the list of the best universities in the world in mathematics, economics and chemistry
Next news
"Let me congratulate you on the International Women’s Day! I wish you wonderful mood, warm homes and inspiration at work! May you have a lot of sunny days in your life!" - Rector of RUDN University Vladimir Filippov
News
All news
About RUDN
RUDN University is in 4th place in terms of the number of entries in the TOP-10 of the “Expert” ranking