Science
A team of chemists from RUDN University created an antibacterial coating for food products. The mixture consists of two components that are safe for human health and form a thin, non-toxic, and biodegradable film. The film has no color or flavor and can increase the shelf life of different products 2.5 to 8 times.

Food wraps are usually produced from chemical compounds based on synthetic polymers such as polyethylene and polypropylene. These materials are bad for the environment and take dozens, if not thousands of years to decompose. Naturally, a food coating should protect the food and contain no toxins that could contaminate it, but it is also important for it to decompose without a trace after being used. A team of chemists from RUDN University created such a coating from polysaccharides—natural macromolecules that are the building blocks of living organisms. Polysaccharides don’t have a negative effect on health, are biodegradable and non-toxic.

The antibacterial coatings suggested by the team are based on chitosan, a polysaccharide that is found in carapaces of crabs or in lower fungi. Specifically, the chemists used two derivatives of chitosan: SC-Na, or chitosan succinyl sodium salt, and a compound of triazole, betaine, and chitosan (TBC). The latter possesses antibacterial properties comparable to those of modern-day antibiotics. According to the team, TBC nanoparticles embed into an SC-Na grid or matrix, creating a thin uniform film. It is much stronger than any of its individual components and lets less oxygen and steam in. In the course of the experiments, the scientists confirmed that the film is the most efficient when the SC-Na to TBC ratio is 1 to 1.

“We managed to obtain non-toxic chitosan derivatives with extraordinary antibacterial properties almost similar to those of commercial antibiotics and suggested that they could be used to increase film durability and antibacterial characteristics. We based our coating on SC-Na, a salt with high film-forming ability. Moreover, it is not toxic and works as an antioxidant, increasing the shelf life of food products. By changing the TBC/SC-Na ratio, we developed multifunctional food coatings with improved antibacterial, protective, and mechanical properties,” said Andreii Kritchenkov, a PhD, and a research assistant at the Department of Inorganic Chemistry, RUDN University.

To test their invention, the team put several bananas in the film for 10 days. In the course of the experiment, the scientists measured their weight, vitamin C content, and the level of carbon dioxide emission. After 10 days these parameters were compared to the results from the control group that was kept without coating. Coated fruit turned out to have lost 3 times less weight and 8 times less vitamin C, and the frequency of their ‘breathing’ was 2.6 times lower (i.e. metabolic processes that are associated with CO2 emissions slowed down).

Thanks to these properties, chitosan-based films can be used to store food products. After a film has been used, it will decompose without causing harm to the environment.

The results of the study were published in the Food Packaging and Shelf Life journal. 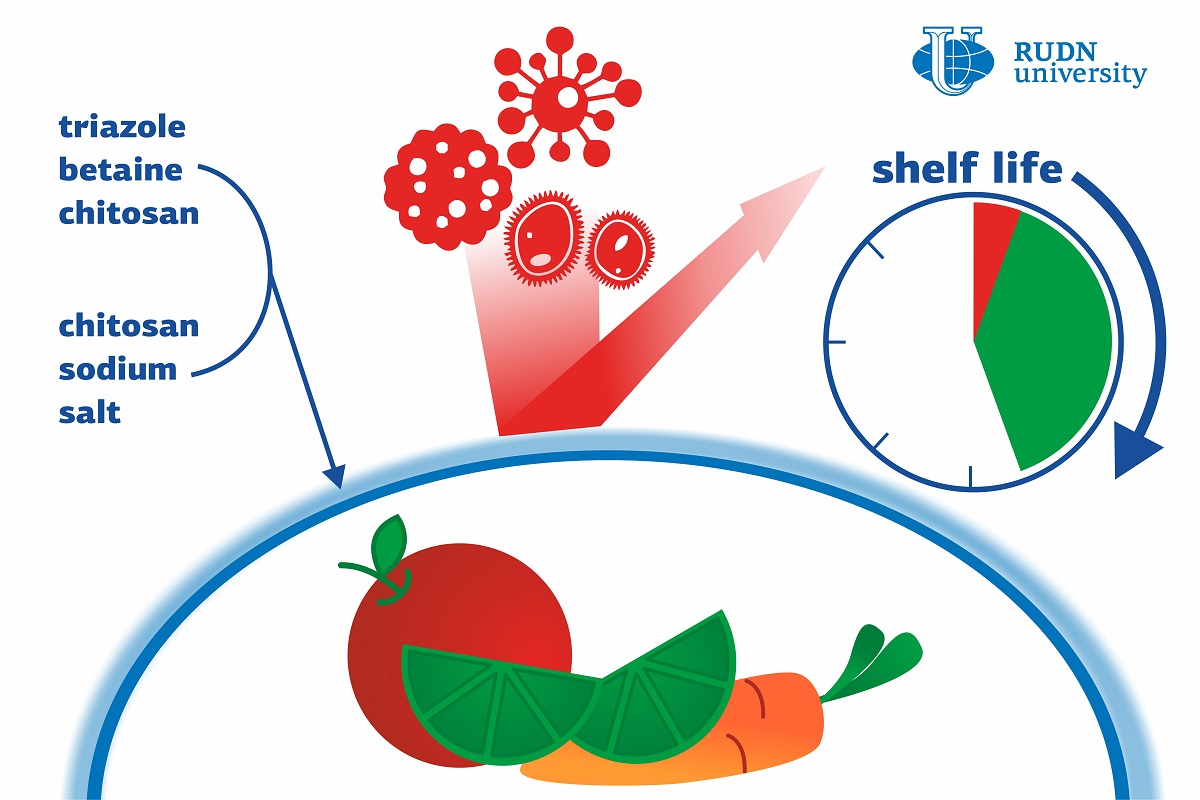 Previous news
“Let the festive atmosphere, filled with the warmth and freshness of the first flowers, surround you every day, let spring bring happy encounters, events and let your wishes come true,” — Oleg Yastrebov, Rector of RUDN University
Next news
“In the cinema, we are shown other realities. Medical ethics does not allow telling a patient that he is dying," Roman Sharifi, resident of RUDN Medical Institute
News
All news
Science
RUDN University Chemists Create Substances for Supramolecules Self-assembly