Science
A team of chemists from RUDN University synthesized new organosilicon compounds containing terbium and europium ions. These complexes have an unusual cage-like crystal structure that contains four metal ions. The team was the first to study the magnetic and photophysical properties of such compounds and to observe their magnetic phase transition and luminescence properties.

Complexes obtained by the team are based on the lanthanide metals, namely, terbium and europium. Lanthanide compounds are known for their unusual magnetic and optical properties: the former make them an excellent source for the production of contrast agents for medical applications, and the latter — materials for electroluminescent devices. However, until this work, these properties had never been studied in detail for lanthanide-containing cage silsesquioxanes. Compounds obtained by the team have an unusual structure that has never been observed before, with prism-shaped cage including central core with four lanthanide atoms. This central layer is coordinated by two cyclic silsesquioxane fragments, solvent molecules, and organic (phosphorus- or nitrogen-containing) cations. Notably, terbium compounds synthesized by the team were the first-ever silsesquioxanes to contain this metal.

“Until recently, only two types of lanthanide CLMSs had been known and had undergone X-ray diffraction study. The first type was cubane siloxane compounds — cube-shaped structures with a lanthanide atom in each corner. The second was the so-called sandwiches: two siloxane fragments with a layer of lanthanide ions and alkaline metals laying between them. Both types were only considered as unusual structural types and/or catalytic system models, and their optical and magnetic properties were largely understudied,” said Dr. Alexey Bilyachenko, a Deputy Head of the Joint Institute for Chemical Research at RUDN University.

To obtain new compounds, the team developed a two-step reaction. First, a reactive substance (sodium phenylsiloxanolate) was synthesized. Second, the so-called self-assembly reaction took place: sodium phenylsiloxanolate (in the presence of organic cations) formed a regular structure due to coordination to lanthanide ions. X-ray diffraction analysis allowed to establish the structure of the products and identified fourmembered siloxane cycles in their structures. Previously, such cycles have only been observed in titanium- and cobalt-based CLMSs.

Magnetic properties of lanthanide-based silsesquioxanes were investigated for the first time. The terbium-based compound demonstrated the magnetic spin flip effect (i.e. the switch from antiferromagnetic behaviour into a ferromagnetic one).

To study the optical properties of the substances, the team subjected them to photoexcitation under the influence of UV or visible blue light. The compounds demonstrated characteristic luminescence: europium-containing substances provided red emission, while terbium-containing ones provided a green one. Therefore, these compounds turned out to be the first CLMSs with magnetic and luminescent properties studied in detail. 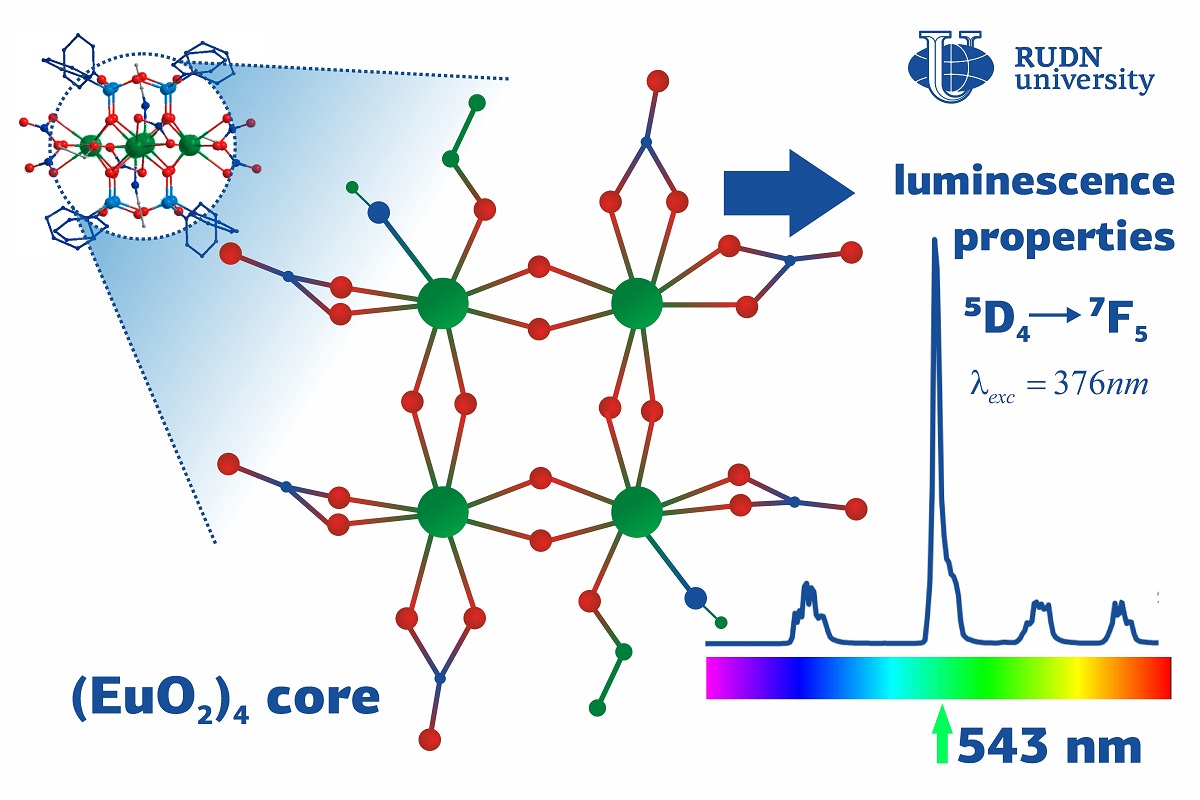 Previous news
"We feel like Olympic champions": RUDN male and female volleyball teams are champions of the international tournament in Italy
Next news
A Mathematician from RUDN University Refined the Model of Predator-Prey Relations in the Wild
News
All news
Science
RUDN chemists have created a biodegradable polymer for disposable medical products