Science
A soil scientist from RUDN University found out that plants with deep root systems promote the storage of organic carbon in the soil. This, in turn, can help reduce the concentration of CO2 in the atmosphere and mitigate climate change.

Global climate change is caused by greenhouse gases (mainly carbon-containing) that are accumulated in the atmosphere. A major part of carbon is consumed by plants in the form of CO2 and gets into the soil after the plants die and decay. Then, some carbon returns to the atmosphere with gases, and some is stored in the soil in the form of organic waste. A scientist from RUDN University suggested a way to increase carbon retention in the soil.

“The ability of soils to store organic carbon can help mitigate the consequences of global climate change. That is why it is important to find ways to increase the retention of organic matter in the soil. For several years now researchers have been focusing on promoting the storage of organic carbon in the topsoil, while its retention in deeper layers (especially in ones below 1 m) remained understudied. However, judging by the biochemical conditions in these layers, one can assume that it should take the organic matter much longer to decompose there. Thus, deeper layers could retain carbon more efficiently,” said Yakov Kuzyakov, a Ph.D. in Biology, and the Head of the Center for Mathematical Modeling and Design of Sustainable Ecosystems at RUDN University.

Perennial deep-rooted plants are one of the ways to transport carbon to deep soil layers. Their roots loosen the soil, emit CO2 into it, feed symbiotic bacteria that live on their surface, and then die. The team studied three perennial plant species that affect the deposition of organic matter in deep soil layers: alfalfa (Medicago sativa), intermediate wheatgrass (Thinopyrum intermedium), and whole-leaf rosinweed (Silphium integrifolium). These plants belong to different families (Leguminosae, Poaceae, and Asteraceae, respectively), but all have roots that are over five meters long.

The team planted the test species in four-meter high transparent containers to monitor the growth of their root systems and take soil and root samples at different levels. To follow the movement of the organic matter in the plants and microorganisms, the scientists used isotopic labeling. The leaves of the plants were submerged into a liquid solution with a rare carbon isotope 13C. The plants soaked it up, and 13C replaced 12C that is much more common in plant tissues. Several days after that, the team took soil and root samples from seven different layers, from 0 to 3.6 m deep, and measured the amount of 13C to understand the movement of carbon in each plant and the soil.

In all cases, the deeper a sample was taken, the less carbon was retained. Alfalfa showed the best carbon retention results at the depth of 3.6 m: 8% of all consumed volume, compared to 2.5% and 2.7% in wheatgrass and rosinweed, respectively. In all three species, the main source of carbon in deep soil layers was dead plant cells. While on the surface dead organisms decay and emit carbon-containing gases, deep in the soil carbon turns out to be stabilized by them.

“We managed to confirm that even small carbon intake is stabilized in deep soil layers. Therefore, deep-rooted plants (especially alfalfa) can potentially be used to retain and store carbon in the soil,” added Yakov Kuzyakov.

The results of the study were published in the Soil Biology and Biochemistry journal. 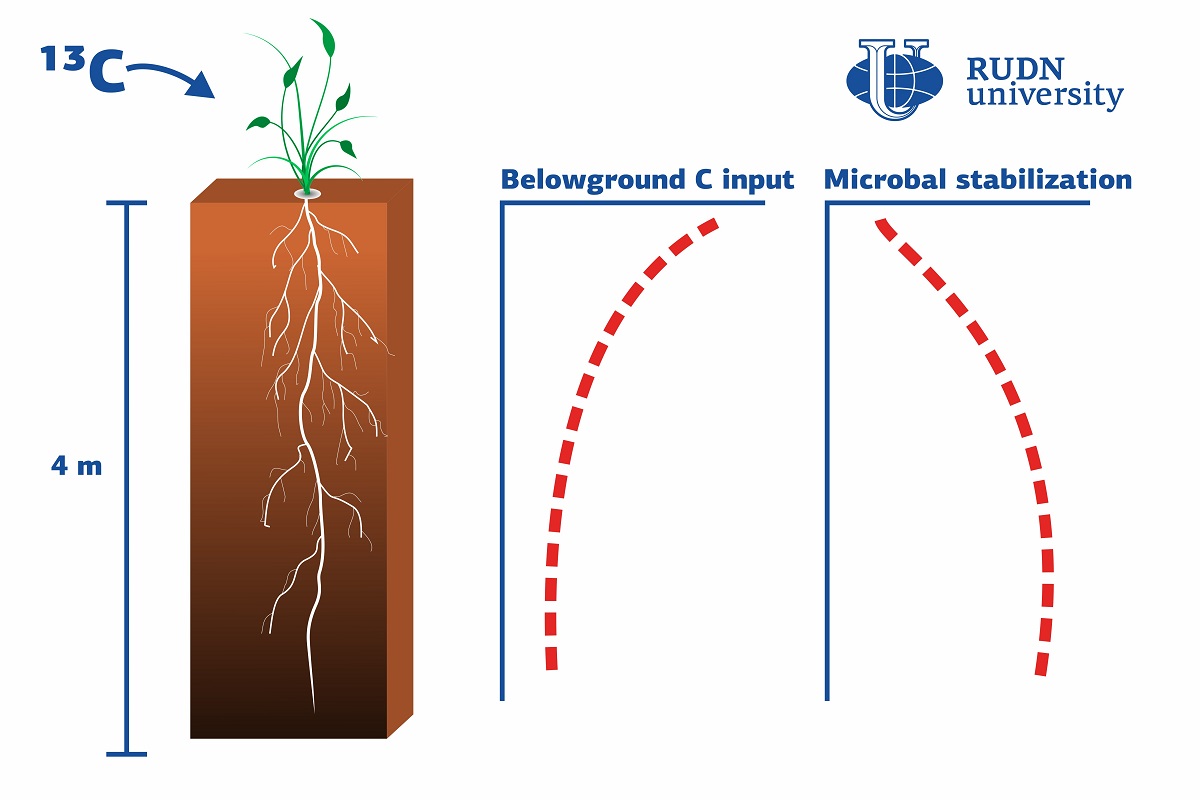