Media
News
Science
Hepatologists in the UK, USA and Russia propose methods for early diagnosis of cirrhosis and liver cancer

Hepatologists in the UK, USA and Russia propose methods for early diagnosis of cirrhosis and liver cancer

Science
February 5, RUDN hosted a seminar "Modern Advances in Ultrasound and Magnetic Resonance Research in the Diagnosis of Liver Diseases", which was attended by practicing hepatologists, gastroenterologists, endocrinologists, and ultrasound diagnostics doctors. Lorenzo Manneli, a professor at Cambridge University (UK) and New York University (USA), shared his experience with colleagues.

The fatty pathology of the liver became the first among liver pathologies - 78% of cases of abnormal liver function are associated with steatosis. Standard ultrasound methods can give an accurate picture only with 25-30% changes in the liver. Leading experts on hepatology from the UK and Russia suggested that ultrasound elastogenesis and steatometry of the liver and MRI be introduced more widely into medical practice.

“Modern methods of assessing connective tissue and fatty liver are of great clinical and scientific importance. Measuring indicators that lead to cirrhosis and liver cancer in the early stages is a difficult clinical task. Liver biopsy is usually performed, but it is difficult to call this method affordable, safe, and suitable for mass screening. Liver MRI, ultrasound elasto- and steatometry of the liver are fundamentally important as non-invasive methods that are gentle and at the same time fairly accurate. They ensure safety and reliability of determining the stage of steatosis (fatty hepatosis, fatty degeneration of the liver) and the degree of progress to cirrhosis of the liver - the stage of fibrosis. These methods will make it possible to widely use in clinical practice regular monitoring of the effectiveness of treatment and to encourage patients showing them that fibrosis is retreating and the liver is restored. The use of elasto-and steatometry of the liver is possible in clinical studies of new drugs. When preparing a clinical trial (CT), pharmaceutical companies, among other requirements, request results of a liver biopsy. This is a serious deterrent, not many people want to do a biopsy for no reason at all. If biopsy can be reliably replaced by elasto-and steatometry, the process of Ct will be simplified”, said professor Pavel Ogurtsov, Dean of the Faculty of Continuing

Medical Education at RUDN Medical Institute, Head of the Department of Hospital Therapy with a course of endocrinology, hematology and clinical laboratory diagnostics.

The seminar was attended by practitioners and leading scientists - hepatologists. “It is a great pleasure for me to exchange ideas with colleagues from RUDN, to discuss topical issues and modern achievements in the field of ultrasound and magnetic resonance research in the diagnosis of liver diseases with practicing Russian clinicians. What I could see today at the seminar is very inspiring. In the face of the problem, and the complexity of diagnosing liver diseases in the early stages is on the agenda of medical centers around the world, colleagues from the Liver Research Center of RUDN are working on an optimal research profile, relying on modern and non-invasive technologies,” said Lorenzo Mannelli, Professor of Cambridge University (UK) and New York University (USA), who made a presentation "Magnetic resonance elasto-and steatometry of the liver".

Boris Zykin, professor of hospital therapy with a course of endocrinology, hematology and clinical laboratory diagnostics at RUDN, said: “Fatty liver disease has come to the fore among hepatic pathologies - 78% of cases of abnormal liver function are associated with steatosis. Standard methods of ultrasound diagnostics will see “fat in the liver” only when it reaches 25–30% of the liver. Only steatometry makes it possible to detect fatty tissue degeneration in the early stages. This is important for identifying patients who do not seem to be at risk, are not obese, and do not have any health complaints. Recently, we have carried out a large amount of research work; one of the students, who had neither symptoms nor overweight, was diagnosed with osteosis of 2-3 degrees. The reason is that he drinks 2-3 bottles of Coca-Cola every day. Even in a small bottle of this drink, there are about 10 lumps of sugar, the excessive consumption of which leads to the development of the metabolic syndrome and, as a result, develops hepatitis, cirrhosis, etc. It is noteworthy that among those with metabolic syndrome, which today is often called the disease of the century, less than 1% know about their condition. It is necessary to promote such methods as elasto-and steatometry of the liver among research and polyclinic institutions. It is important to be able to diagnose metabolic syndrome at the very beginning of its development. Previously, there were no diagnostic tools, today there are. ”

The seminar "Modern Advances in Ultrasound and Magnetic Resonance Research in the Diagnosis of Liver Diseases" was organized by the Department of Hospital Therapy with a course of endocrinology, hematology, and clinical laboratory diagnostics at the RUDN Medical Institute together with RUDN Liver Center. 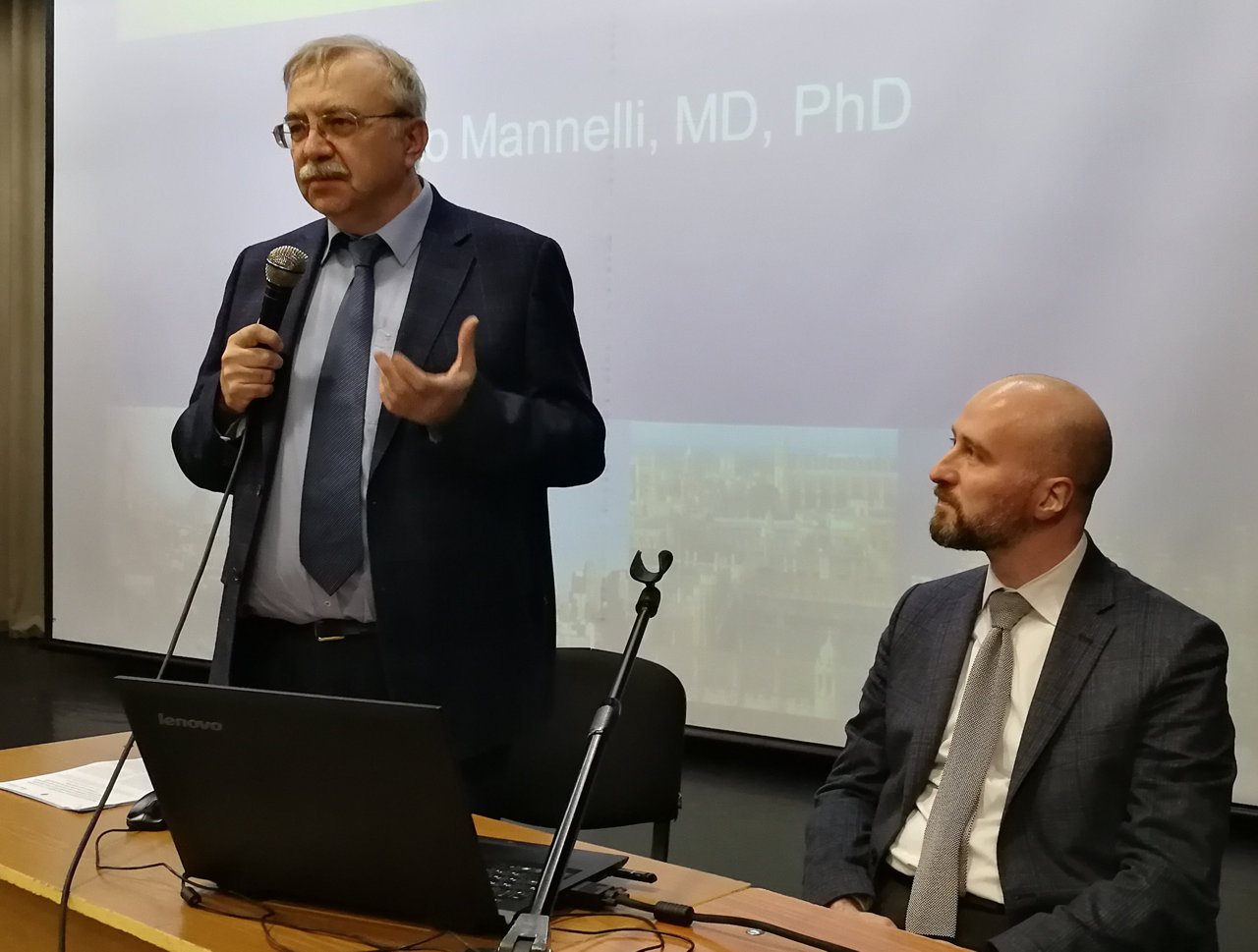