Science
RUDN University professor and her colleagues from France proved that higher intake of magnesium and vitamin B6 helps to cope with the consequences of magnesium deficiency during pregnancy and in hormone-related conditions in women. Within four weeks, the painful symptoms become less severe, the quality of life improves, and the risks of miscarriage are reduced. The results of the study are published in Scientific Reports.

Magnesium is involved in important processes in the human body -- from protein synthesis to respiration. The most common causes of magnesium imbalance are a lack of this element in the diet, diabetes, and hypertension. The problem of magnesium deficiency is more acute for woman, because magnesium is in higher demand during pregnancy. The lack of magnesium also leads to conditions associated with hormonal disorders -- endometriosis or polycystic ovary syndrome.

"Our study was aimed to assess the effectiveness of magnesium-vitamin B6 intake in achieving normalization of total serum Mg for patients with different starting levels of deficiency. It was also important to determine at what Mg level the painful symptoms are eliminated, and the patients notice changes and quality of life", said Svetlana Orlova, Doctor of Medicine, Head of the Laboratory of Molecular Nutrition of RUDN University.

The study involved 869 pregnant women, with a median age of 28, and 957 women with hormone-related conditions. The median age in this group was higher -- 44 years. The participants were residents of varying size cities in Russia. Laboratory tests showed that they had a lower level of magnesium in the serum (less than the 0.8 mmol per liter). Pregnant women have experienced symptoms associated with the risk of miscarriage, such as high blood pressure and excessive activity of the uterine muscles. Patients in the group with hormone-related conditions, along with the main symptoms were concerned about osteoporosis, premenstrual and menopausal syndromes.

Participants received magnesium and vitamin B6 supplementation in the standard dosage for their gender, age, and weight for four weeks. During this time, for most women (73.8% in the group of pregnant women and 58.9% in the group with hormone-related conditions) Mg level increased to 0.8 mmol / L and higher. In most of the others, it was in the between 0.66 to 0.8 mmol / L, which is considered as a moderate magnesium deficiency. At the same time, the total number of complaints about painful symptoms both during pregnancy and in the group of women with hormone-related conditions decreased by an average of 1.

"Along with the physiological state, we monitored the quality of life of the patients. World Health Organization quality of life questionnaire assessed such aspects as physical health, psychological health, social relationships, and environment. During the study, the scores increased, and the most noticeable effect was among the group of women who reached normal Mg level starting from a moderate deficiency. Thus, we have shown that the consequences of a minor magnesium deficiency can be eliminated by receiving supplementation. For more ssevere deficiency below 0.5 mmol / L, treatment must target the cause of the Mg deficiency", said Svetlana Orlova, Doctor of Medicine, Head of the Laboratory of Molecular Nutrition of RUDN University. 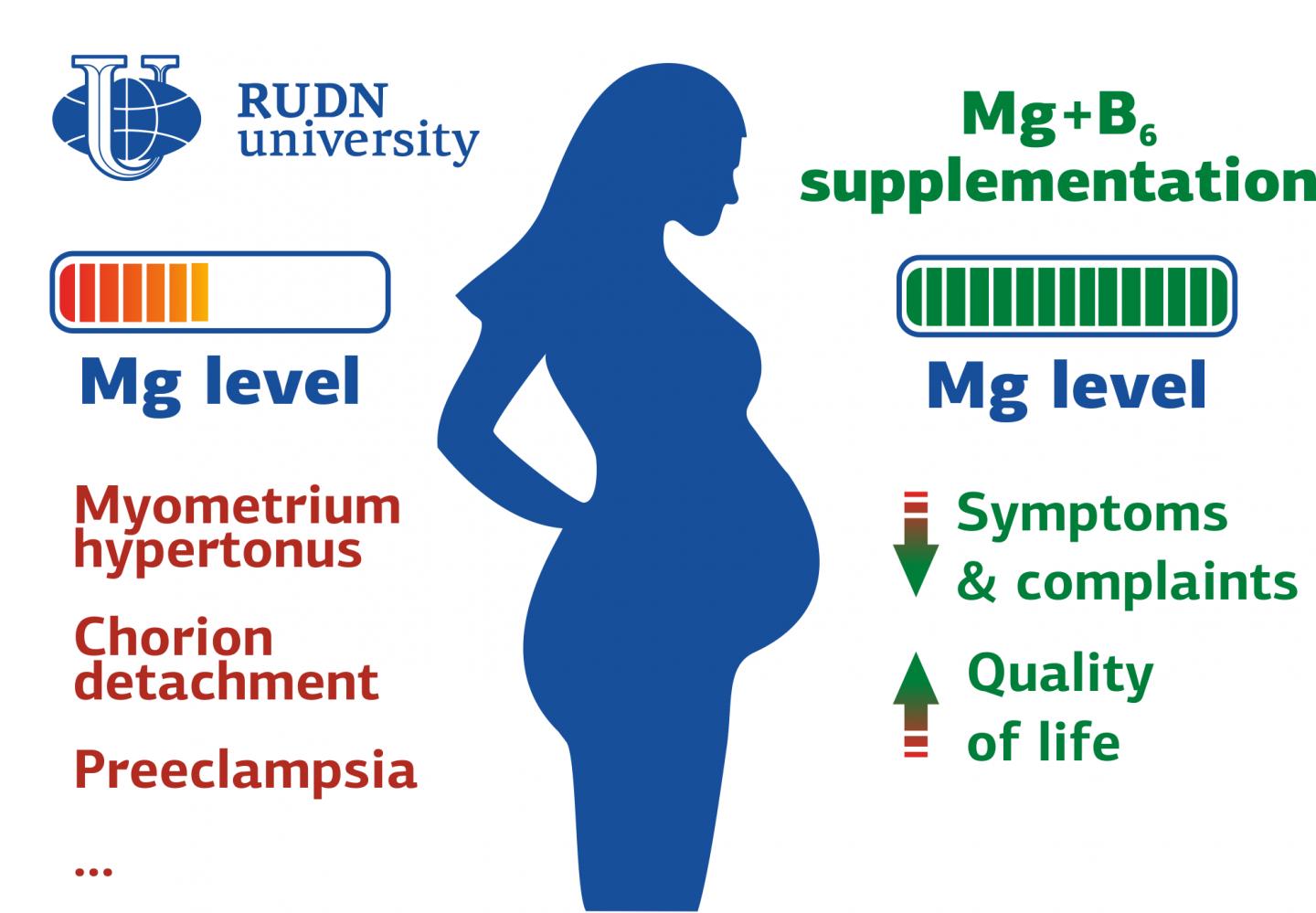