Science
A soil scientist from RUDN University studied the effect of forest conversion on the properties of the soil: its acidity, carbon and nitrogen resources, bacterial composition, and the activity of microorganisms. The study can help improve the methods of soil cultivation after deforestation, namely, select the best fertilizers, prevent erosion, slow down nutrient depletion, and balance the composition of the bacterial community.

The demand for crop farming products grows constantly, and to satisfy it, more and more forests are converted into plantations. In these converted areas sustainable and diverse ecosystems are replaced with monocultures (crop species). Such changes in land utilization affect both the chemical content of the soil and its biological composition, that is, the structure of its microbial community. Until recently, studies had focused on either the former or the latter aspect of this process. A soil scientist from RUDN University was the first to conduct a comprehensive study and to find out how deforestation and changes in chemical factors caused by it affect the bacterial composition of the soil.

“The diversity of soil microorganisms doesn’t necessarily reduce as a result of forest conversion. However, bacterial communities undergo massive transformations. The bacteria that used to dominate in forest soils can almost disappear after deforestation and planting of crops. The key factors in this process are soil acidity and carbon and nitrogen resources,” says Yakov Kuzyakov, PhD in Biology, and the Head of the Center for Mathematical Modeling and Design of Sustainable Ecosystems at RUDN University.

His team compared soil samples taken from a forest and four plantations in Hunan Province in South-Eastern China. Five years before that the whole territory had been covered with a pristine forest. The scientists measured the acidity of the soil, as well as the levels of carbon and nitrogen in it. All these indicators are associated both with soil fertility and bacterial activity. Microorganisms play a role in the circulation of soil carbon and also ‘fix’ nitrogen, making it accessible for plants. It turned out that soil acidity reduces after deforestation, and the levels of organic nitrogen and carbon drop by 83%. According to the team, this may be due to the reduction of vegetative cover and soil erosion. However, to the team’s surprise, bacterial diversity in plantation soils turned out to be 6.8% higher than in forest soils.

The scientists believe this might be due to the fertilization of plantations. Fertilizers contain a lot of nutrients, thus increasing microbial diversity. Moreover, cultivated soil is enriched in carbon and other substances that also support intensive bacterial growth. Reduced acidity might be another factor to promote microbial and especially bacterial diversity. Different bacteria turned out to dominate in forest and plantation soils. For example, deforestation created perfect conditions for photosynthesizing bacteria. They transform sunlight into energy, which is a much more difficult task in shady forests.

“We found out that changes in the bacterial composition of the soil are mainly due to soil acidity and the levels of organic carbon and nitrogen. Therefore, efficient soil management methods should be developed for monoculture plantations to improve fertilization, prevent soil erosion, slow down the depletion of nutrients, and support microbial activity after deforestation,” added Yakov Kuzyakov.

The results of the study were published in the Forest Ecology and Management journal. 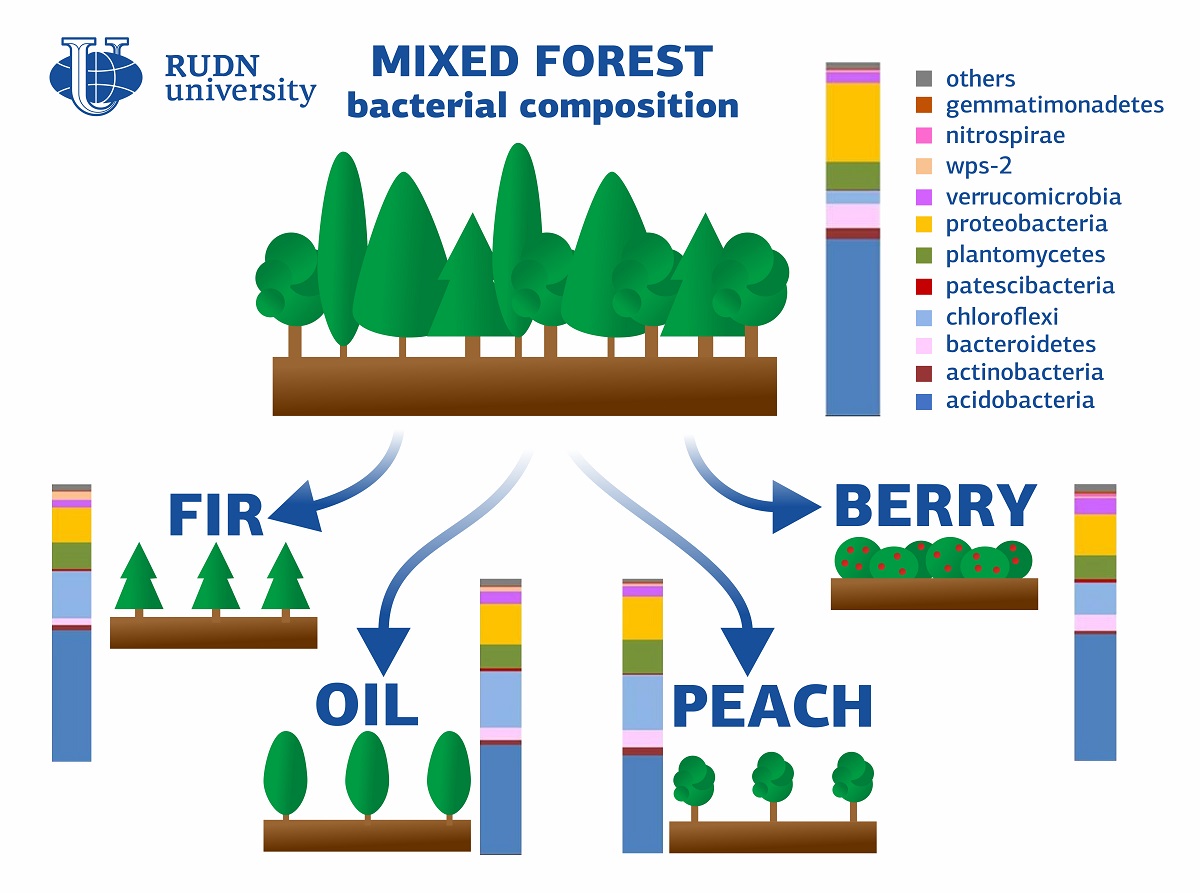 Previous news
Turning off computers and going offline: RUDN University, we are back
Next news
Stepping into a new decade: RUDN University celebrates its birthday
News
All news
Science
RUDN chemists have found an effective catalyst for the synthesis of raw materials of the chemical industry