Science
A soil scientist from RUDN University studied soil samples collected at the Tibetan Plateau and discovered that high soil moisture content (caused by the melting of permafrost and glaciers) leads to further temperature increase. Therefore, the rate of soil bogging should be held back in order to slow down global warming.

The main reason for global climate change is the growing concentration of carbon dioxide in the atmosphere. Carbon dioxide keeps the heat in and prevents the planet from cooling off, causing the greenhouse effect. Humans are not the only sources of carbon dioxide. Even our soil breathes it out: it contains different compounds that release carbon in the form of CO2. Global warming causes glaciers and permafrost to melt which increases soil moisture content. Until recently, scientists had been unaware whether the growth of soil moisture affects the volumes of emitted carbon dioxide. To find it out, a soil scientist from RUDN University studied soil samples collected at the Tibetan Plateau—a place where temperature grows three times faster than anywhere on the planet.

“Soil drainage advances the mineralization of carbon in the soil and increases the volume of carbon dioxide emissions. However, the growth of soil moisture content should not necessarily lead to the opposite effect. To find out whether it is really so, we studied these processes in wetland and meadow soils that have contrasting biochemical properties,” said Yakov Kuzyakov, a PhD in Biology, and the Head of the Center for Mathematical Modeling and Design of Sustainable Ecosystems at RUDN University.

The scientists took samples of meadow and wetland soils and identified what substances in them contained carbon: undecomposed plant waste or decomposed biomass. After that meadow soil was saturated with water up to 70% of liquid content it was able to hold. Wetland soil was left for 95 days at 25 ℃ to dry out. Then the team measured the carbon content in the samples once again and described changes in respective carbon dioxide emission rates.

After all these manipulations, both samples turned out to emit carbon dioxide more intensively. According to the team, it is explained by the initial carbon content of the samples. In wetland soils, carbon is mainly found in plant waste that has not decomposed yet. On the contrary, in meadow soils, the source of carbon is mainly decomposed biomass in which soil enzymes are more active. Therefore, high moisture slows down carbon mineralization and carbon dioxide emissions in wetland soils, but in meadow soils, it accelerates both processes.

“We confirmed that carbon decomposition in water-filled soil depends on the initial plant and microbial residue content and showed that biochemistry should be taken into consideration when regulating carbon decomposition. Both the reclamation of wetlands and the bogging of meadowlands increase carbon mineralization measured in the form of CO2 emissions,” added Yakov Kuzyakov.

The study shows that protecting meadowlands from bogging can help reduce carbon dioxide emissions and slow down global warming. Otherwise, a chain reaction may occur: the greenhouse effect would further promote global warming, which would in turn lead to more meadowland bogging.

The results of the study were published in the Soil Biology and Biochemistry journal. 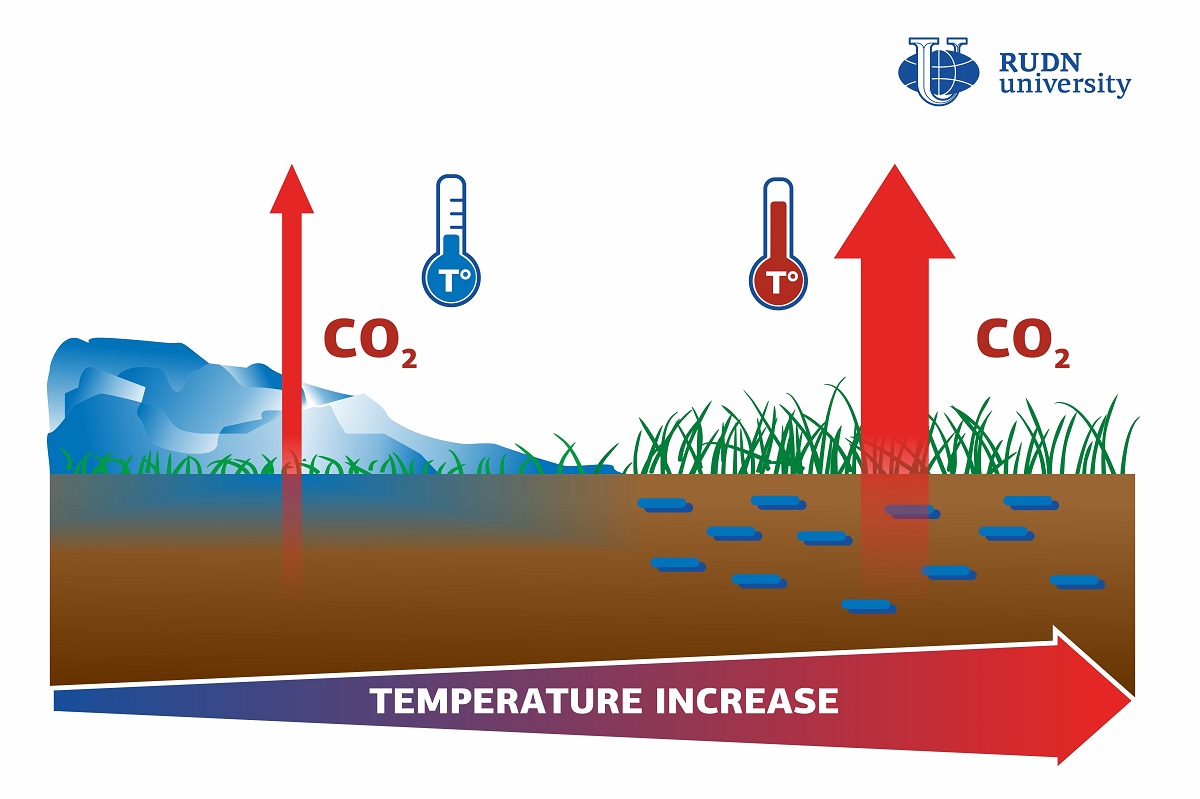