Media
News
Science
“My goal is to make a useful scientific discovery that will help people”, - Esparza Sandoval Cesar Augusto, graduate student of the Faculty of Science of RUDN University

“My goal is to make a useful scientific discovery that will help people”, - Esparza Sandoval Cesar Augusto, graduate student of the Faculty of Science of RUDN University

Science
Esparza Sandoval César Augusto from Colombia, a graduate student in the Faculty of Science at RUDN University, Organic Chemistry, spoke about research, life in Russia and plans for the future. How did you know about RUDN?
I am from the Republic of Colombia, city of Bucaramanga, where I studied for 2.5 years at the Industrial University of Santander, department of Chemistry. Graduates of RUDN University work at the university of their native city; from them I learned about the University of Peoples’ Friendship. They talked about studying in the times of the USSR, about the difference in the educational system of that time and today and praised the teachers. I wanted changes, and I decided to try to study abroad. I was selected according to the results of school final exams and was invited to study in Moscow.

In a month you will have to defend a thesis “Combination of planar chromatography and mass spectrometry MALDI (laser analysis) for the study of mixtures of organic compounds”. Tell more about your work.
The study is based on various methods of analysing chemicals and organic compounds (natural compounds) substances used as drugs. Such analyses require accurate and expensive instruments that are not always available. My goal is to prove that the method I developed allows analysing substances with cheaper and no less effective approaches. The combination of two well complementary methods (planar chromatography and mass spectrometry MALDI) gives new opportunities for accurate analysis of substances.

How do the methods you choose work?
Organic compounds are always around us - products, the human body, the environment and drugs. They are present everywhere - from substances in our blood to amino acids in food. This topic is always interesting and relevant, chemists study their identification, separation and synthesis. I chose the following methods: planar chromatography is a fast and affordable method for separating mixtures into components, mass spectrometry is the determination or identification of substances by their mass-to-charge ratio, this is an analysis that allows each component of the mixture to be recognized, regardless of whether it is a mixture or not. MALDI is one of the methods of mass spectrometry. It allows you to analyse high-molecular compounds using a laser: peptides, proteins, and so on. My research is one of the ways to prove that this method works not only for high-molecular compounds, but also for low-molecular compounds, such as paracetamol.

MALDI method is not more than 30 years old, it is considered new and relevant to study. I analysed and understood that very few people have studied this topic, so I took it for a thesis. I looked at how MALDI was combined with planar chromatography and tried to develop a technique that would allow the analysis of organic compounds.

What is the most interesting for you in the work on your thesis?
Most of all I like practice. In the laboratory of RUDN University there are a lot of useful devices on which I learned to work. When I was just beginning to study, I could not even turn them on, but over the course of a long work with fellow students and teachers, it became easier and easier for me. It motivates when you work with a device that costs half a million dollars and get results. Such work is very popular, and if you like what you do, then you will succeed. 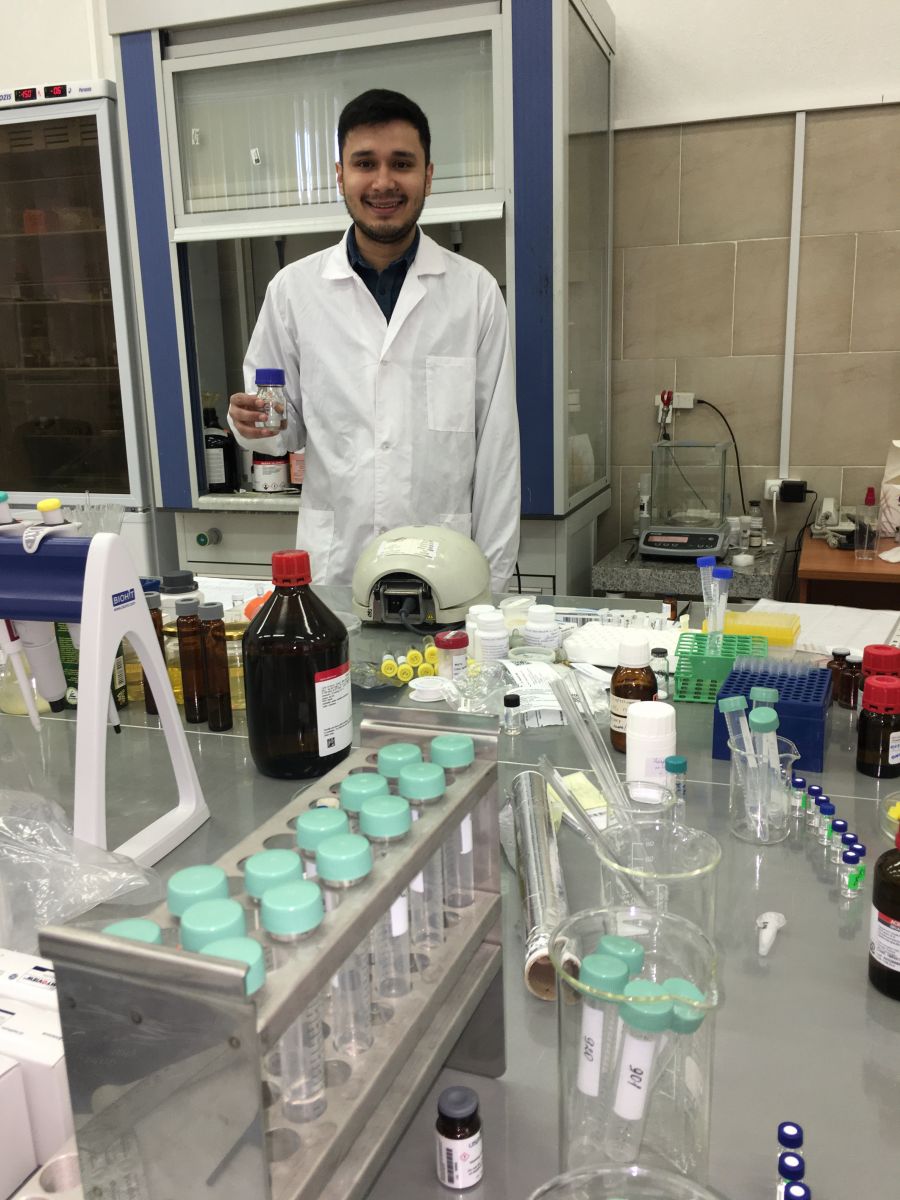 Is there a scientific discovery that inspires you to research?
Since I have been engaged in mass spectrometry for a long time, I have always been interested in the discovery of new lasers in MALDI, their combinations and more accurate methods for studying organic compounds. Each of these methods is designed to solve a specific problem in the analysis of organic compounds.

Let's talk about the beginning of your scientific journey. What influenced your choice?
I have loved chemistry and biology since school, I began to study them when I was 15 years old. Our school had a small laboratory in which we conducted experiments and worked with a microscope. At school I set myself the goal to go into science.

When you get Chemical Sciences PhD, many ways for scientific activity will open up before you. Which one will you choose? Will you return home and will you develop there or will you stay in Russia?
We have formed a group of experts from professors and students. We are working on projects that will require more than one year to implement. For now, I will stay in Russia and will bring them to the end. We are studying the possibility of using new devices for the analysis of organic compounds in dairy products and want to develop a faster and more accurate method. There are a lot of counterfeit products on the market. You can sell butter, which is composed of dangerous for human life substances or additives. The technique allows quick analysis of the products in order to reveal whether the product is authentic or falsified, and it also allows to determine these substances and the percentage of their content.

You have been living in Moscow from the beginning of your studies. What do you like here?
I like the university: professors, student groups, the ability to conduct research ...

I have been living in Moscow for more than 10 years. Something interesting always happens here and there is something to do. For example, recently in Russia, the FIFA World Cup 2018 was held. We have not had it in Colombia. And there are also many theaters, museums and parks.

I have Russian friends with whom we go together to relax and travel around Russia. I have already visited Astrakhan, Kazan, St. Petersburg, Tver and Tula. I dream to visit other cities!

What did RUDN become for you during the years of study here? Describe it in one phrase.
RUDN for me is the door to another world. There are a lot of people from different countries who I knew nothing about before. I learned about different cultures: Russian, Indian, Korean - it broadens the mind.

Do you have a goal or a dream that you want to fulfil with the help of science?
I want to create an improved and more accurate method for testing dietary supplements and food - for the presence of harmful impurities. My goal is to help people and not to let prohibited substances get into the human body. 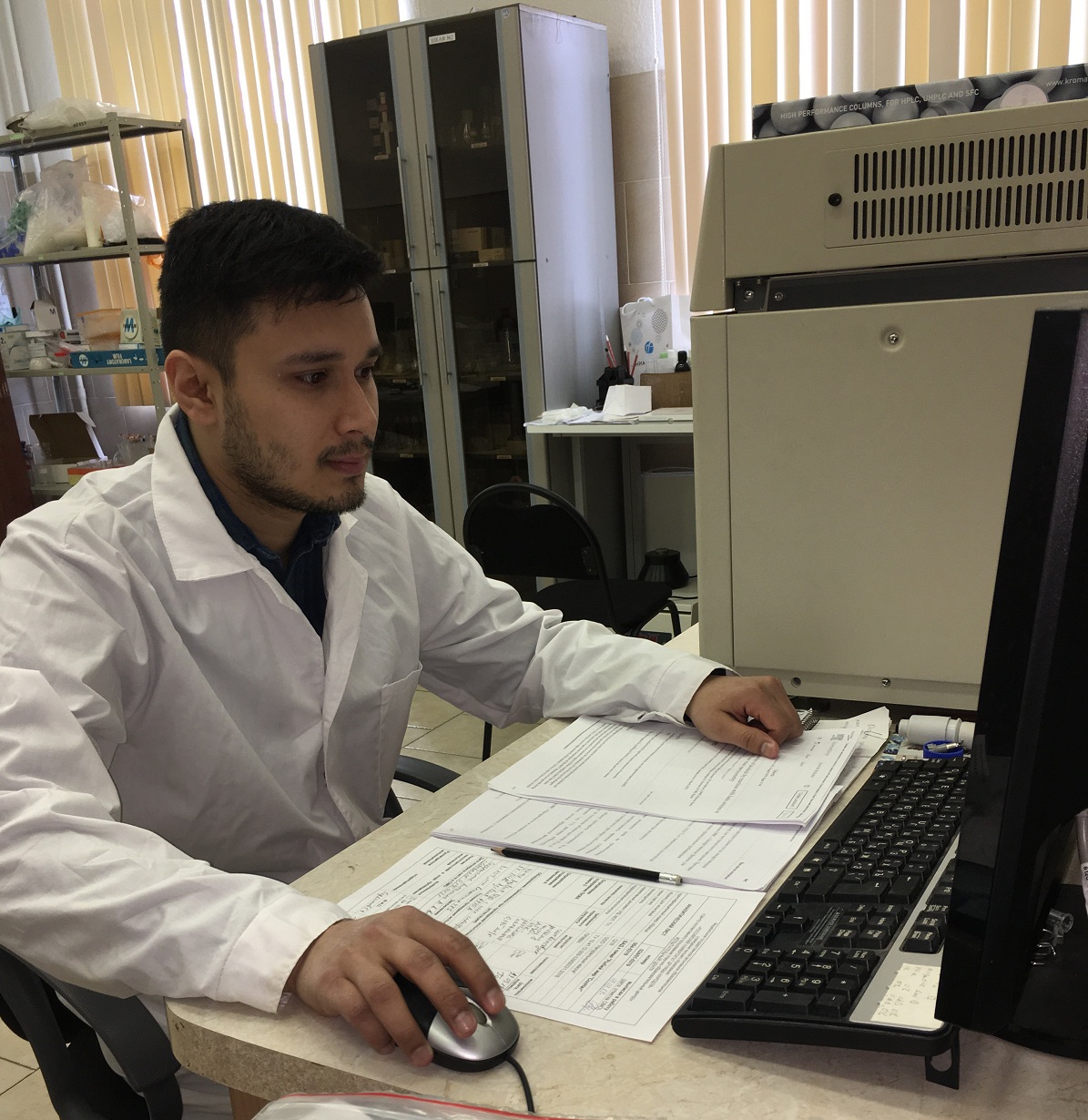 Tags: education
Previous news
Full immersion: the Director General of Exotic Time Company spoke about the intricacies of work in the field of diving tourism
Next news
7 mistakes in communication of young specialists: the founder of Communications School Rise Up speaks about effective business communication