Science
RUDN chemists have created a biodegradable polymer based on chitosan and polyhydroxybutyrate. Chitosan, which is obtained from animal shells and fungal cells, gives the compound antimicrobial properties, so it can be used for disposable medical and hygienic materials and products.

Biopolymers are used in biology, medicine, cell engineering, electronics to create, for example, healing films or to filter heavy metals and other pollutants. Biopolymer polyhydroxybutyrate in the form of microparticles is used for a drug delivery system with a prolonged effect — the carrier particle with the drug gradually decomposes and releases the drug into the desired area. The same material can be used to create degradable packaging. To control the rate of decomposition and otherproperties, fillers are added to biopolymers. For example, one of the most promising systems is the compound of polyhydroxybutyrate and chitosan (a substance that is part of the shells of animals and fungal cells). The properties of such compounds have already been studied for the case when chitosan is not enough in it, only 0.05-0.3%. The chemist of RUDN University investigated the properties of a complex compound with a significant content of chitosan — up to 70%.

“Now much attention in world science is paid to the creation of a new class of biodegradable materials from ultra-thin fibers. The most promising system is a mixture of polyhydroxybutyrate and chitosan. This combination has enabled the creation of a new generation of fully biodegradable systems with increased sorption capacity, controlled biodegradation rates and the ability to release substances with a wide range of speeds (from weeks to months). Therefore, we decided to study in detail the structure and peculiarity of the decomposition of materials based on polyhydroxybutyrate with a high (40-70%) chitosan content, ”- Candidate of Biological Sciences Alexander Vecher, Deputy Director of the Nanotechnology Center of RUDN University.

Chemists created films and fibers from polyhydrlksibutyrate and chitosan. The structure of the resulting material was studied using an electron scanning microscope, and its thermal properties were studied using a calorimeter. Chemists also investigated the decomposition of the film under the influence of soil microbes and oxygen.

Scientists are convinced that chitosan significantly changes the nanostructure of the biopolymer. Fibers of pure polyhydroxybutyrata are similar to thin tangled threads with thickenings, and inthefibers of the complex material look like distorted cylinders, from which thin processes are stretched along the axis. In soil,itosan slows down the process of decomposition of the material -for an application, about 40% of the fibers of pure polyhydriooxybutyrate and only 20% of the fibers of the complex polymerdecomposed in 30 days. Chemists explained this by the antimicrobial effect of chitosan. However, the addition of chitosan at the same time accelerates the decomposition of the material under the action of oxygen.

“Thus, the developed materials based on polyhydroxybutyrate and chitosan have an increased ability to oxidative decomposition, and also have potential antibacterial properties due to the presence of chitosan. These composite materials can be recommendedfor the creation ofdisposable biodegradable sorbents, medical materials and hygiene products, ”- Candidate of Biological Sciences Alexander Vecher, Deputy Director of the Nanotechnology Center of RUDN University.

The results are published in the journal Polymers. 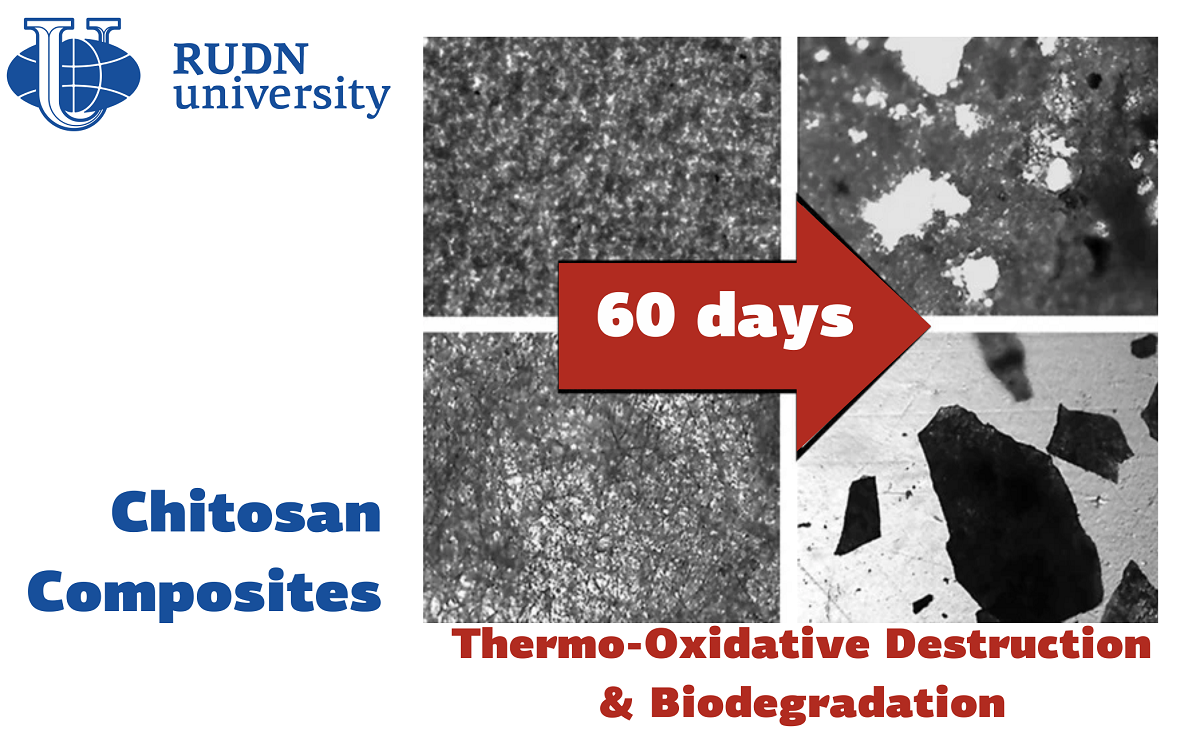 Previous news
“I have a stool and a lampshade in my collection, as well as graphics works and paintings,” Anastasia Chugunova, an excellent student of Design of the architectural environment
Next news
Great love for the profession and alma mater. The story of Victoria Ismagilova, an excellent student of 10 semesters of RUDN Engineering Academy
News
All news
Science
RUDN University Chemists Create Substances for Supramolecules Self-assembly