Science
RUDN University mathematician together with colleagues from India and France for the first time studied in detail the system of coexistence of three species of living creatures in the wild. The results help to understand what parameters determine the extinction andли survivalof species, and how the number of species changes in space and time.

In the wild, different species compete for food and habitat. Sometimes the “winners” succeed each other in a certain queue, sometimes-chaotically. Depending on this, the number of species varies in space and time according to a certain pattern — To maintain biodiversity, it is important to understand the laws that govern this process. Existing studies, mainly, study two-species models — when only two species compete in the system, usually — "predator"and " prey". RUDN University mathematician together with colleagues from India and France for the first time studied in detail the formation of patterns in a model with three types.

"Very few studies of the spatiotemporal dynamics of biodiversity aim to modelи cyclical competition with three or more species. In addition,as far as we know, there is not a single study in the literature that explicitly studies the formation неподвижных паттернof fixed patterns in cyclic models of competition of three types“,-Doctor of Physical and Mathematical Sciences VitalyVolpert, Director of the RUDN University Interdisciplinary Research Center “Mathematical Modeling in Biomedicine”.

To describe a model with three competing types of mathematics, we used a system уравненийof reaction-diffusion equations. It consists of three differential equations with three unknowns — the population density of three species. All three unknowns are related to each other through diffusion coefficients — they show how much a change in the number of one species affects the rest. The model also includes coefficientsыthat determine the internal properties of species -for example, the speed of reproduction and movement. RUDN University mathematicians investigated the system analytically-found the conditions for the formation of patterns, and also numerically-conducted a computer simulation of the model.

As a result, mathematicians got a wide range of possible patterns — fixed, periodic, chaotic.We also considered the case when the pattern is not formed at all. Which option is implemented — depends on the system parameters: diffusion coefficients and intraspecific characteristics. For example, if initially the species are evenly distributed in the system, but the coefficients of interspecific diffusion are cyclical (that is, the first species has more influence on the second, the second on the third, and the third — onthe first), then periodic fluctuations in the number are established over time. If one of the diffusion coefficients is large enough, the pattern is then broken — as a result, one species survives, and the other two die out.

“From an ecological point of view, large values of the diffusion coefficient make one species a superior competitor. This eventually destroys the stable oscillatory coexistence, and this species becomes the only survivor. Disappearance of one or more species dueto competition-signsая of characteristicsand models of multi-species competition. The specific scenario ofextinction is determined by the parameters of intra-and interspecific competition for models with a homogeneous population distribution”, -Doctor of Physical and Mathematical Sciences VitalyVolpert, Director of the RUDN University Interdisciplinary Research Center “Mathematical Modeling in Biomedicine”.

The study is published in the Bulletin of Mathematical Biology 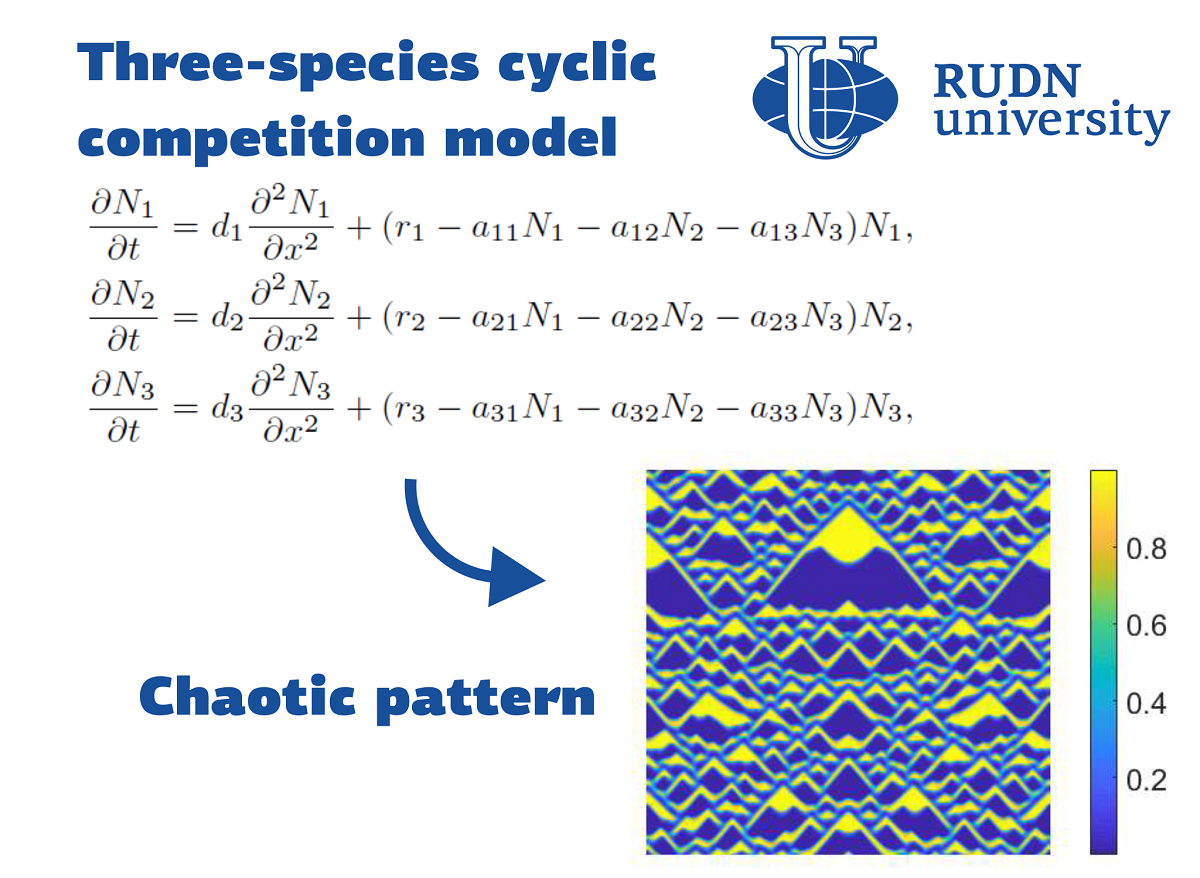 Previous news
“Our meeting is aimed only at making medical care of high quality and safe,” Mikhail Murashko, Minister of Health of the Russian Federation
Next news
“We were glad to be in Russia”: participants of the RUDN summer school from Pakistan about Russia, the university and Russian hospitality
News
All news
Science
RUDN chemists have created a biodegradable polymer for disposable medical products