Media
News
About RUDN
National identity of citizens, specific features of socio-cultural environment, status of national minorities in Europe. These and other questions were discussed by the participants of the Round table

National identity of citizens, specific features of socio-cultural environment, status of national minorities in Europe. These and other questions were discussed by the participants of the Round table

On 26 September, over 60 people, including teachers and students of RUDN University Institute of Law, Faculty of Economics, Philological Faculty and Faculty of Humanitarian and Social Sciences attended the round-table session. Special guests were experts from France.

On 26 September, over 60 people, including teachers and students of RUDN University Institute of Law, Faculty of Economics, Philological Faculty and Faculty of Humanitarian and Social Sciences attended the round-table session. Special guests were experts from France.

Current migration processes were described by Alexey Gromyko, Director of the Institute of Europe of The Russian Academy of Sciences, as the Great Migrations.

Various aspects of migration, such as security, preservation of identity, culture and religion, protection of the rights of citizens and borders of states were discussed during the round-table session.

Yvan Blot, former Deputy Minister of the Interior of the French Republic and Professor at the Nice Sophia Antipolis University, paid particular attention to the security issues. He noted the urgent need to develop the correct tools designed to fight terrorism, since “the modern laws punish those who have committed crimes, whereas if we are dealing with terrorism, it is necessary to punish those who haven’t committed a crime, but planning on doing it.”

In his speech, Nicolas Dhuicq, Member of the French National Assembly and Member of the Defense and Armed Forces Commission, noted the problem of information security and emphasized that the situation is becoming more uncontrollable. “There is a risk that the right to privacy of ordinary citizens could disappear because of the new information technologies, and also because the citizens demonstrate all the details of their private lives, including on social networks." – said Nicolas Dhuicq.

After their presentations, the experts answered many questions addressed to them. Among the most interesting topics for students of RUDN University were the status of national minorities in the context of increasing migration problems in Europe and in France; concern about the lack of coordination between the security forces of European Union countries that was demonstrated during the terrorist attacks in Brussels and Paris; the possibility of overcoming the differences between the Christian and Muslim faiths in the context of the fight against extreme manifestations of religious intolerance; problems of the preservation of the borders of the Schengen area. 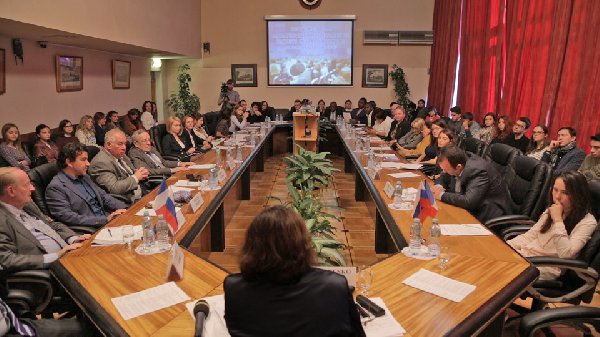 Previous news
New programs of student and teacher mobility. Ambassador of the State of Palestine to Russia Abdel Hafiz Nofal visited RUDN University
Next news
Vladimir Filippov was elected Head of CIS Advisory Board on cooperation in Education. The meeting was held on 3 October in Moscow
News
All news
About RUDN
RUDN University in the Times Higher Education Impact Ranking 2021