Science
RUDN soil scientists have revealed a direct correlation between the rate of soil formation of carbon dioxide, called CO2 emissions, and the content of microbial biomass in it. It is known that CO2 emission from soil is mainly conditioned by respiration of soil microorganisms and plant roots. The more CO2 soil emits, the more microbial biomass it usually contains. It was shown that CO2 emission by chernozem of different ecosystems (or different types of land use) correlates with the content of microbial biomass, and most closely with the rate of its microbial respiration. And the soil with good microbial properties has the “best quality”, is more fertile, provides the highest yield of crops and other plant biomass.

The studies related to the simultaneous measurement of CO2 emissions from soils of different land use and its microbial properties are not carried out so often, and the results of such studies are largely contradictory. Therefore, to study the possible relationship between these indicators, RUDN soil scientists together with colleagues from the Institute of Chemical Physics and Technology of the Russian Academy of Sciences (Pushchino) analyzed the chernozem soils of the virgin steppe, broad-leaved forest, naked fallow and cities located in the forest-steppe zone of European Russia (Kursk region).

Transformation of natural ecosystems into arable land leads to a deterioration in the functioning of the soil microbial community and is expressed in a decrease in its amount and respiratory activity. Taking into account that at least half of the CO2 emissions from the soil surface to the atmosphere is ensured by the respiration of soil microorganisms (CO2 formation), and the transformation of terrestrial ecosystems is usually accompanied by a deterioration in the functioning of the soil microbial community (a decrease in biomass and inhibition of respiratory activity) and a decrease in the amount of available soil organic carbon, the soil scientists put forward a scientific hypothesis that there should be a certain interrelation between the emission of CO2 from the soil and its microbial properties.

“Considering that the СО2 emission from the soil is regulated by hydrothermal conditions (temperature, humidity), and its moisture is important for the soils of the steppe zone, the assessment of the microbial respiration of these soils during the growing season will reveal its interrelation with the emission flow of this gas,” says co-author of the article Kristina Ivashchenko from RUDN.

Every month from May to October, RUDN soil scientists were measuring measured in vivo the CO2 emission of the chernozem of unmown steppe, forest (oak grove), naked fallow and meadow (located in the city). Soil CO2 emissions were measured by a closed-chamber approach using an infrared gas analyzer. Immediately after measuring the emission activity of the soil, its samples were taken from the upper 10-centimeter layer, which were then delivered to the laboratory for measuring microbiological parameters. The carbon content of microbial biomass (CMIC) was analyzed using the method of substrate-induced respiration, which is based on the respiratory response of soil microorganisms to the introduction of one of the main metabolites of decomposition of plant litter — glucose. Microbial respiration (MR) of soil microorganisms was determined in soil samples without plant roots, which were removed by sifting.

The MR of soil of forest, steppe, fallow, and urban areas ranged from 0.28 (fallow) to 1.81 μg CO2 — C g-1 h-1 (forest). The MR of naked fallow and urban soils during the study period did not change; in the forest it was the highest in October, and in the steppe — in July and August. The MR in undisturbed ecosystems was 2–4 times higher than in disturbed ones (city, naked fallow).

The study demonstrated that СО2 emission from the soil surface in the studied ecosystems has a positive correlation with the CMIC content and MR of the upper 10-centimeter soil layer (r = 0.56 and 0.74, respectively). A regression analysis of the experimental data showed that CO2 emission from the surface of chernozem of different land use during the growing season was determined by the CMIC content by 52% and the MR value by 78%. In other words, the emission activity of chernozem of different land uses is associated with the enrichment of the soil by microorganisms and, to a greater extent, their respiratory activity, which, in turn, also depended on climatic conditions (temperature, humidity).

Thus, a close correlation and regression relationship were revealed between CO2 emissions from soils of different types of land use and its microbial properties in the forest-steppe subzone of European Russia, which can be very useful for predicting this process in a certain territory with different ecosystems. The obtained experimental results can be used for more rational farming.

The studies conducted by RUDN soil scientists have shown that CO2 emissions from soils of different ecosystems can be calculated on the basis of experimental data, such as microbial respiration for the top most biogenic 10-centimeter soil layer. Such results will be useful for assessing CO2 emissions from soil for a wider range of ecosystems (land use types) of the forest-steppe plant subzone. In other words, soil sampling during the growing season with subsequent measurement of their microbial respiration under laboratory conditions can serve as the basis for calculating the emission activity of soil in a certain area.

The article was published in Eurasian Soil Sience journal. 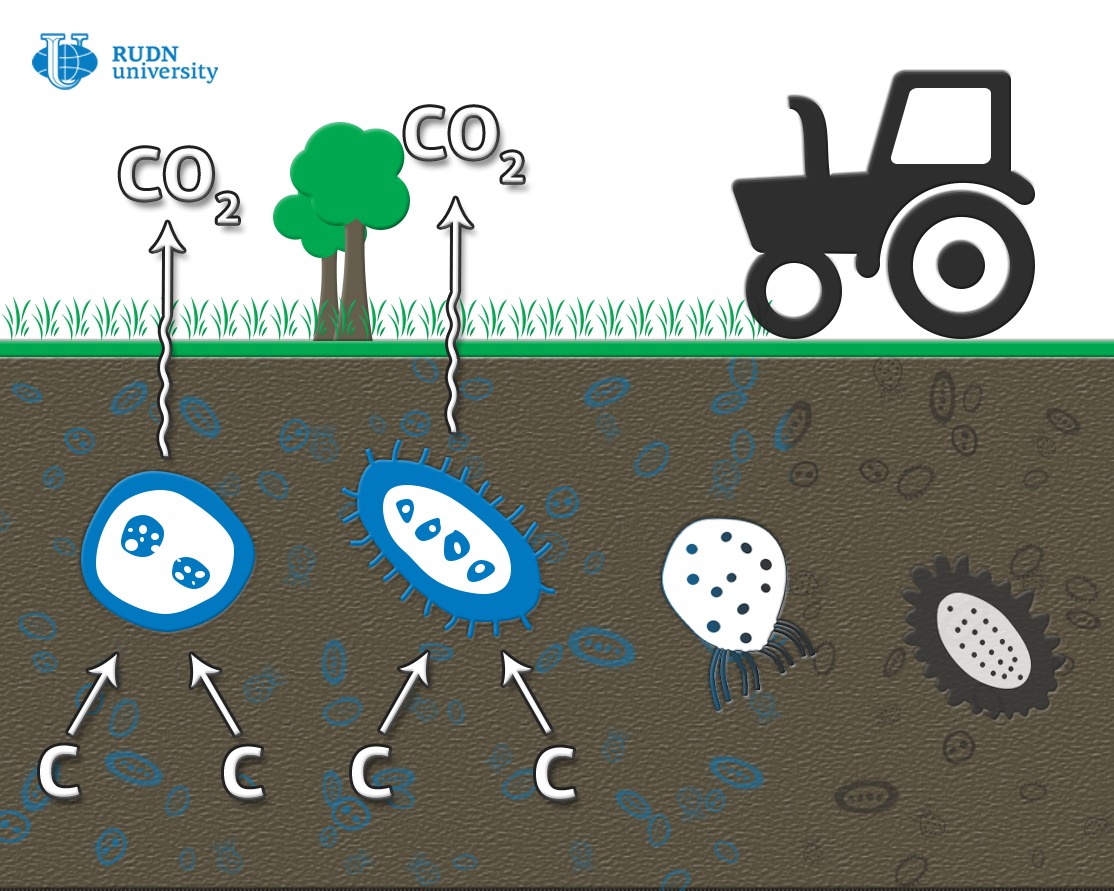