In the last 100 years, Mediterranean ecosystems were no longer exploited by humans so intensively. The environmental protections in Europe have strengthened as well. Because of that, some forests began to recover and go through the processes of secondary succession, i.e. the change of one vegetation community to another after the former’s destruction. One of the important consequences of such a process is the restoration of soil fertility, earlier depleted due to human activities, and in particular an increase in the concentration of carbon and nitrogen in the soil and biomass. Scientists previously believed that forest ecosystems needed to accumulate carbon for at least several centuries, first in plants, then in soil, for the amount of this element to reach the average for a virgin forest. However, there was no exact data on these processes, and almost no research on the Mediterranean old oak forests have been conducted, despite the fact that they occupy 160 thousand hectares in Italy alone.

Giovanna Sala and Riccardo Valentini from RUDN University and their colleagues from Germany and Italy studied vineyards on the island of Pantelleria, located between Sicily and Tunisia. Some of them were abandoned relatively recently, only several decades ago, while others have already been replaced by oak forests which grew over the past hundred years or more that passed since they were abandoned and therefore not affected by human activity.

The researchers separated three classes of land areas. First, zones abandoned less than 45 years ago; shrub species are typical there, e.g. a mastic tree (Pistacia lentiscus) and green olive tree (Phillyrea latifolia). Second, territories abandoned 70 to 45 years ago; for such habitats holm oaks (Quercus ilex), which grow only up to 5 meters, are typical, as well as shrubs: a mastic tree and phyllyrea. Third, maquis shrubland aged 70 to 100 years. The term “maquis” ecologists use to call ecosystems dominated by thickets of evergreen hard-leaved and thorny shrubs and undersized trees.

The environmentalists compared these maquis ecosystems with an old forest over 100 years old, formed by holm oaks and creepers from the genus Smilax.

The researchers analysed the chemical composition of underground biomass, soil, and litter for nitrogen and carbon content using drying, weighing, and chemical analysis of the samples. The results showed that in old-aged forests the amount of nitrogen and carbon in all layers of the soil is higher than in abandoned vineyards. While the underground biomass of the youngest maquis contained 15 milligrams of carbon per hectare, for an old-aged oak forest this figure was 100 milligrams.

Similar picture was observed when the surface layers of the soil were analysed: carbon content for old forests was 100 milligrams, and for former vineyards 30 milligrams. The amount of nitrogen in abandoned vineyards soil was 3.5 milligrams and 10 for old oak forests. The environmentalists compared the collected data and found that the carbon/nitrogen ratio does not change during the change of ecosystems.

The RUDN University ecologists showed the dynamics of the development of forest ecosystems during the change of one vegetation community to another after years of destruction of forests by humans. The soil scientists have proven that the older the ecosystem, the more nitrogen and carbon are accumulated in it, in all layers of the soil and in the litter.

The article was published in the journal PLOS One. 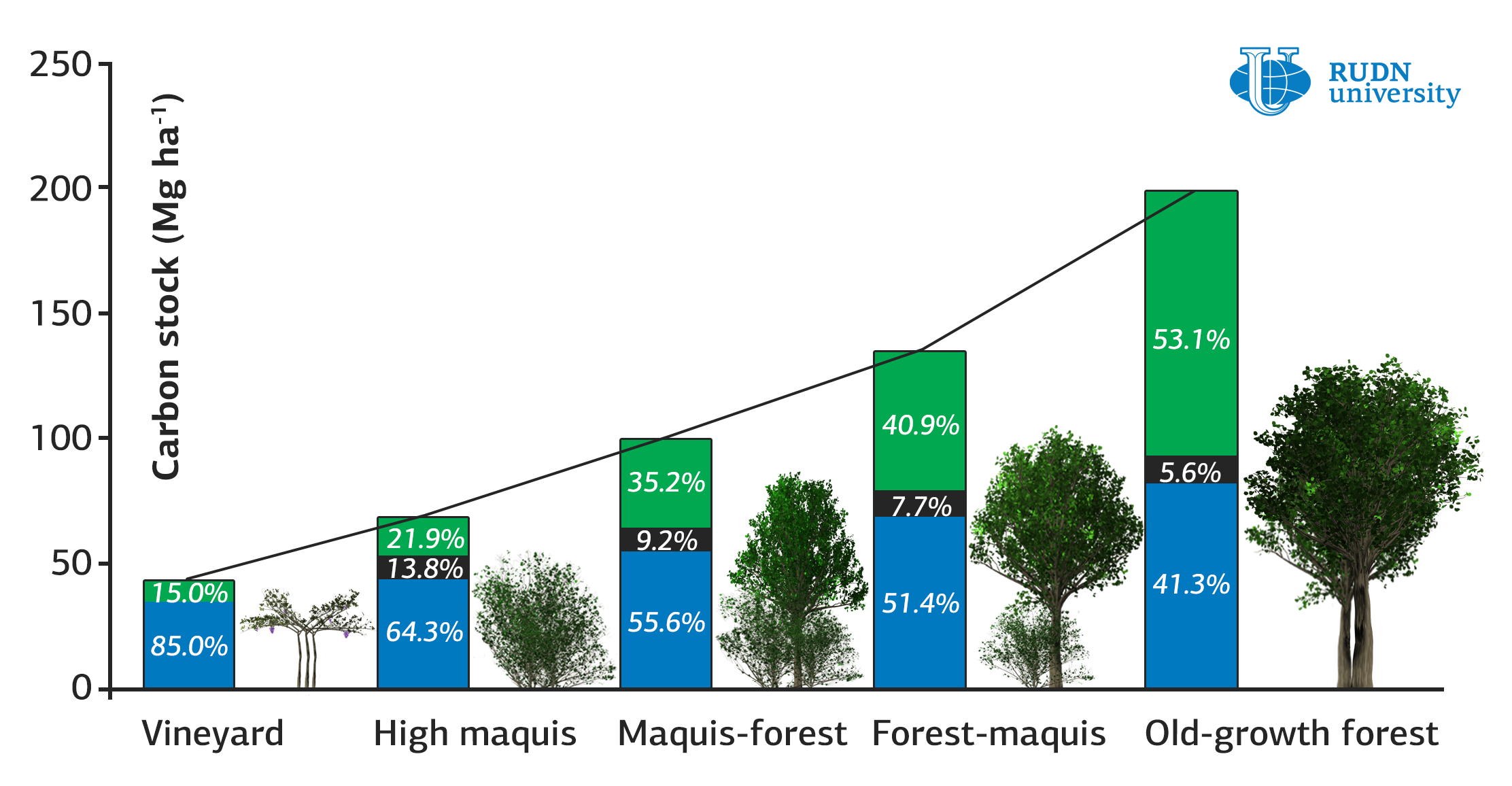 Previous news
90 donors donate blood at RUDN University for the “Follow me!” Campaign
Next news
Three students of RUDN Medical Institute awarded medals of the President of the Russian Federation
News
All news
Science
RUDN professor Yakov Kuzyakov is recognized as one of the most cited scientists in the world